New approach calls for relying on other communities, slowing effort to build plant in the Baylands 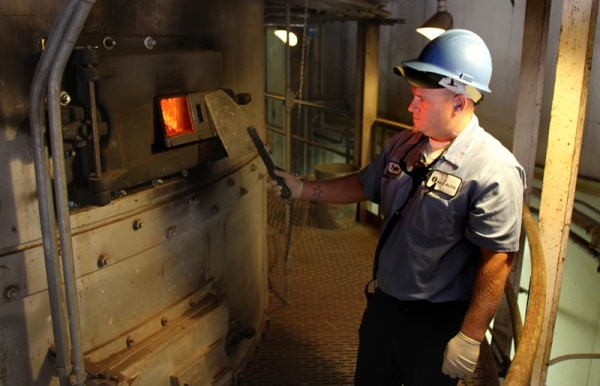 Trained plant operator Tyler Longscott checks on the incinerator at the Regional Water Quality Control Plant on June 4, 2014. Voters passed Measure E in 2011 to build a facility next to the plant to convert organic waste into energy, but the city has yet to follow through with the plan. Weekly file photo. 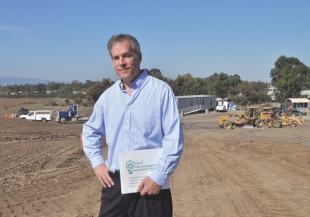 Former Palo Alto Mayor Peter Drekmeier stands on the site where he envisions a new composting facility. He understands city's staff choice to hold off on building a new industrial waste operation at the Baylands due to high prices. Weekly file photo.

There was a vibrant debate about the appropriate technology to achieve our waste disposal. It ended when the anaerobic digestion proponents used their political influence to win the day. The fix was in from the beginning. Now we have the consequences of that decision. We were promised a solution to all of our waste streams including sewage sludge. What are the realistic alternatives now?

Too bad we can't email our waste problem away and then hit the delete button when our in-box is full.

This is going so slowly that it wouldn't be surprising if newer and better solutions were developed before Palo Alto does anything.

Re the headline, one taps the "brakes", not "breaks."
Proof-reader on vacation :)?

Gennady Sheyner is a registered user.


Thanks, Observer. Sorry for the error. It's been fixed.

Report Objectionable Content
Email Town Square Moderator
10 people like this
Posted by Carol Muller
a resident of Duveneck/St. Francis
on Aug 4, 2017 at 11:20 am

Once again, the vote on Measure E is being misrepresented. The Measure itself was cleverly constructed by those advocating building a waste disposal facility on the lands which had previously been dedicated for parkland. It did not ask for a vote for building such a facility, but rather made the "reasonable" case that undedicating the parkland would allow for STUDY of the possibility. The vote therefore passed -- many thoughtful Palo Altans thought it reasonable to study the possibility, but had not weighed in on a decision about building such a facility. This is an important distinction.

Report Objectionable Content
Email Town Square Moderator
13 people like this
Posted by Anon
a resident of Another Palo Alto neighborhood
on Aug 4, 2017 at 12:12 pm

What a waste (funny pun) Measure E was. For those who went to the early study session in council chambers, before the digester was ever pushed on us as a ballot measure by a faction of zealots, the actual experts made a clear case that the technology wasn't feasible. But this message wasn't listened to then by the pushers of the digester and their unsupportable idea was foisted on voters that sounded good but wasn't ever going to be feasible. And - it was in a park! So all its done is tie up acres of parkland for 10 years.
That's the waste.

Report Objectionable Content
Email Town Square Moderator
17 people like this
Posted by Jim
a resident of Midtown
on Aug 4, 2017 at 1:10 pm

Cedric de La Beaujardiere and Peter Drekmeier have a lot to answer for. They pushed this fiasco. As I recall, there were those who warned about the unreality of their technological approach at the time. There was a guy who really took them on. I recall that he pushed plasma arc or some other gasification approach (where is he now?).

We have been led down the primrose path by single-focus propagandists.

Report Objectionable Content
Email Town Square Moderator
16 people like this
Posted by Shame on them
a resident of Community Center
on Aug 4, 2017 at 1:19 pm

Back then I called it drekmeiers folly. Looks like I was right. From the article it looks like cedric and peter are not accepting responsibility for this fiasco.

Report Objectionable Content
Email Town Square Moderator
2 people like this
Posted by OK
a resident of Palo Alto Hills
on Aug 4, 2017 at 2:57 pm

All our waste is shipped off to San Jose! No clean-up, no mess, no worries!
Problem solved!

Are we talking raw sewage treatment or garbage? There's a big difference.

Report Objectionable Content
Email Town Square Moderator
6 people like this
Posted by Gary Chandler
a resident of Ventura
on Aug 5, 2017 at 11:22 am

Dumping this deadly cocktail known as "biosolids" on reclaimed mines, farms, ranches, golf courses, parks and school grounds is killing innocent people and our wildlife. It's a legitimate prion threat to livestock--as in mad cow disease. It is one of the contributing factors to chronic wasting disease. Do you know anyone with autism or Alzheimer's disease?

1. The risk assessments are fraudulent, incomplete and outdated at best. As such, the practice of land application is illegal. Prions (deadly proteins) weren't even known to science when the EPA faked the "sludge rule." Prions are unstoppable in the sterile confines of an operating room, so they are clearly unstoppable in the high-volume, low-tech operations of your local wastewater treatment plant;

3. Given the two assertions above, biosolids dumped on land are a clear violation of the Bioterrorism Preparedness and Response Act of 2002. Biosolids are fueling the spike in autism, Alzheimer's, chronic wasting disease, Zika virus, West Nile virus, valley fever and more. It's time to send some bioterrorists to jail and prosecute some public servants for treason. Web Link

Sewage sludge consists of anything that you or a terrorist can dump down the toilet or the storm drain, including radioactive material, carcinogens, pharmaceuticals and every transmissible disease known to humans. It will be dumped on a farm tomorrow where it will contaminate food and water with a deadly nerve agent, endocrine disrupters and more. Sewage sludge isn't fertilizer. It's bioterrorism. Just look at Kern County. It's drowning in sewage sludge from LA and the residents are contracting valley fever at an alarming rate. Unfortunately, that isn't the only health concern for people, wildlife and livestock.

Report Objectionable Content
Email Town Square Moderator
3 people like this
Posted by Jim
a resident of Midtown
on Aug 5, 2017 at 3:59 pm

Sewage sludge should not be used as a fertilizer...period. Toxin just build up in the soil. It is my understanding, though, that all the organic molecules can be destroyed in very high temperature reactors, such as plasma arc, with the added benefit of positive electricity output. The inorganic materials are turned to slag, which is sterile and useful for a variety of industrial products. There was a guy on this site that made this argument, very strongly, when this debate was going on, but he seems to have disappeared.

Report Objectionable Content
Email Town Square Moderator
5 people like this
Posted by Creighton Beryl
a resident of College Terrace
on Aug 5, 2017 at 4:40 pm

"... all the organic molecules can be destroyed in very high temperature reactors, such as plasma arc, with the added benefit of positive electricity output. The inorganic materials are turned to slag, which is sterile and useful for a variety of industrial products"

We still await a valid scientific/engineering analysis of those claims. We do not hold our breath while we wait.

>We still await a valid scientific/engineering analysis of those claims. We do not hold our breath while we wait.

@ Creighton Beryl: We now know that the composting facility is dead. It never passed your criteria of scientific/engineering (and cost)analysis. The various gasification approaches make a lot more sense, and they have already been tried in a number of places, to my knowledge. What are your criteria?

Do you think our city of Palo Alto will go to a gasification method? Also, do you happen to remember the name of that guy who argued so strongly for plasma arc gasification? I can't remember his name, but he was really into it.

Report Objectionable Content
Email Town Square Moderator
3 people like this
Posted by Creighton Beryl
a resident of College Terrace
on Aug 6, 2017 at 4:24 pm

"Do you think our city of Palo Alto will go to a gasification method?"

Not if it's smart. That said, who knows.

Whatever the merits of plasmification, Palo Alto is much better off joining a regional consortium, as it is wisely presently doing, than building its own boutique plant.

"Also, do you happen to remember the name of that guy who argued so strongly for plasma arc gasification?"

No, but he has posted several times since. Stay tuned.

It took me some time to figure out who the guy was that argued against anaerobic digestion and in favor of gasification methods, specially plasma arc. His name is Craig Laughton. Too bad we didn't listen to him back then. Now that the anaerobic digestion method had been found to be too expensive and lacking in full solutions, we need to go back to the drawing board.

I just posted an early thread has the basic arguments.

UdyRegan is a registered user.


I'm really surprised that more cities don't take a page from the books of the European countries and facilities that are doing very well with waste management and treatment. There is so much more that we can do with all this trash in storage if we know where to look for examples of what to do with it in a more efficient manner!

Flying: How to lower your impact
By Sherry Listgarten | 19 comments | 3,224 views