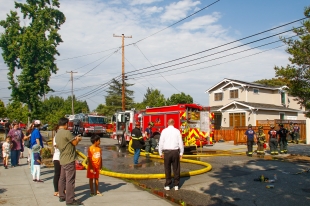 Neighbors and onlookers watch as fire crews from Palo Alto and Mountain View fire departments extinguish a one-alarm fire located on the second floor of a multi-unit building (far right, not pictured) on Aug. 4, 2017. The fire began in the kitchen, and though it was only contained in the kitchen there was extensive smoke damage to the second floor. Photo by Veronica Weber.

This the second such fire in a relatively short time frame. The last one (about 2-3 weeks ago) also involved a kitchen fire (due to an unattended stove with hot oil). It also occurred in the Ventura neighborhood.

If I was the landlord, I would evict both these tenants for negligence.

Fortunately no one was hurt.

How can you write that without knowing nothing about what happened? ? It was not the tenants, it was the dishwasher.