Resident briefly chases down one burglar who escapes from home, finds another exiting backyard 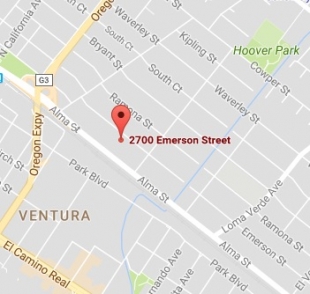 A resident returned to his Midtown home on Emerson Street Thursday afternoon to find two burglars, one inside and another leaving through the backyard. Map courtesy Google Maps.

Editor's note: The Weekly has chosen to withhold the name of the arrested until the case is adjudicated and if there is news value in reporting the information at that time.

Kudos to the PAPD for getting two more bad people off of the streets! The article didn't say how these men "broke in" to the home. This makes it seem like it wasn't simply thieves entering through an open window or door.

Regardless, I hope that these men are off the streets for a long time. Sometimes, I wish that criminals could be tagged and released while on probation.

I was told by a police officer and have heard this several times from others:
(1) Best not to enter the house if you suspect it has been broken into. Call 911.
(2) Burglars often 'chart' homes that are unattended during certain hours of the day.
(3) Back doors and garage-house doors are the preferred means of entering unnoticed.
(4) Secure doors with deadbolts and glass entrances require additional protection OR have an alarm installed.
(5) Lastly, if you are armed and decide to shoot the burglar, make sure that they are inside the house before discharging your weapon.