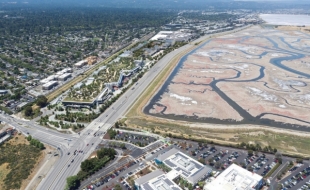 SamTrans is ready to release its study funded by Facebook on how to ease traffic on the Dumbarton corridor, which includes Bayfront Expressway and Willow Road. Image courtesy Facebook.

We live next to the daily backup on Middlefield Road between University Avenue and Willow Road. Rush-hour timed stoplights along Willow and University and on the downtown stretch of Middlefield might be very helpful. For all of our vaunted smarts around Silicon Valley, we don't seem to have made much use of this idea. (Page Mill and Sand Hill Road during rush hour would definitely benefit as well.)

Try fixing the large pot holes on the bridge it might improve traffic a little,

2 people like this
Posted by Resident
a resident of Another Palo Alto neighborhood
on Aug 2, 2017 at 1:58 pm

Express buses across the Bay would be a good idea. We need to have park and drive lots at freeway off ramps with dedicated express buses and shuttles.

"For all of our vaunted smarts around Silicon Valley, ..."

It ain't the smarts. It's something much more powerful--politics.

Those various lights would have to be synched jointly among traffic control bureaucracies in not only different towns, but in different counties, maybe even with the state. Each entity would have to cede some control over its fiefdom to the others. That's a gross violation of the bureaucrat way. Not gonna happen on this planet.

Report Objectionable Content
Email Town Square Moderator
7 people like this
Posted by Flex work spaces!
a resident of Adobe-Meadow
on Aug 3, 2017 at 7:44 am

Traffic was not nearly as much of an issue when companies allowed and encouraged their employees to flex their work hours and work from home a 1 or 2 days a week.

The problem is that the fix is not something the corporations want. As communities we should force this issue because the traffic problem is owned by the companies who REQUIRE their employees to be at their desk every day for specific set hours.

Report Objectionable Content
Email Town Square Moderator
5 people like this
Posted by Mark Silverman
a resident of Menlo Park
on Aug 3, 2017 at 12:47 pm

Use hovercraft and ferries to reduce any Dumbarton related gridlock. Park car, hop on the boat and then ride shuttles to various work destinations.

Report Objectionable Content
Email Town Square Moderator
6 people like this
Posted by PAmom
a resident of Mayfield
on Aug 4, 2017 at 1:35 pm

Hows this, oooohhh, maybe put an office in the East Bay. Why does all the tech have to be on this side of the bay. There should be extension offices in the east bay for most major companies and then that would relieve the congestion and allow parents to not commute a gazillion hours and be away from their families just so that can afford a house.

Report Objectionable Content
Email Town Square Moderator
4 people like this
Posted by musical
a resident of Palo Verde
on Aug 4, 2017 at 2:59 pm

^ East Bay has no status. All is vanity, sayeth the Book.

How about we rebuild the Rail line across the Dumbarton. Have ACE and the Capitol corridors Serve SF. And Caltrain to Fremont.

Report Objectionable Content
Email Town Square Moderator
11 people like this
Posted by resident
a resident of Downtown North
on Aug 5, 2017 at 1:51 pm

Widening the bridge and highway will just flood our roads and parking lots with more cars and we are already over capacity. Spend the money on improved public transit, both trains and busses.

Report Objectionable Content
Email Town Square Moderator
2 people like this
Posted by Mike Morris
a resident of another community
on Aug 16, 2017 at 4:06 pm

Merriam-Webster. Carpetbagger. A resident or nonresident who seeks gain from an area ,often by meddling in its business or politics. Let's see, Facebook paid for the DRC study.Why? To gain profits by having the tax payers and residents and others pay for a train from the east bay and/or Redwood City station to its business location in Menlo Park. Facebook is a Carpetbagger. No doubt about that. Sounds like a bribe to me.. Caltrain already goes to Menlo Park and Palo Alto. Just increase shuttle service from the train stations, save a lot of money. The DRC study isn't About saving money it's al about taking your money and ripping you off. Another person commented that Facebood should move some of its business to the east bay , great idea.. To much development in Menlo Park Redwood City areas.....

'Are they ready for fully innovative Indian food?' Ettan arrives in Palo Alto with chaat, caviar and a secret menu
By Elena Kadvany | 1 comment | 3,770 views