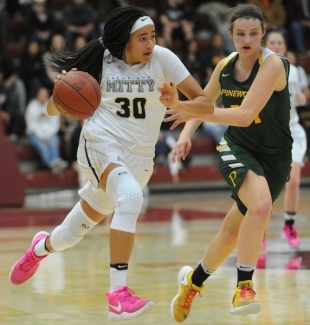 Hannah Jump has spent her summer playing on a talent-packed all-star team; an experience she believes will benefit her the remainder of her high school career and beyond.

Jump, who is headed into her junior year at Pinewood, played with the Cal Stars AAU team, a team loaded with some of the best talent in Northern California.

Despite playing in an extreme ball-sharing environment, Jump was the high scorer with 19 points, making five 3-pointers, when the Cal Stars cruised to a 67-41 victory in the championship game of the End of the Trail Platinum Division Ultimate Bay Area Challenge.

“There’s a lot of really good talent on this team,’’ Jump said. “When I play with players who are better than I am I can learn from them and use that to improve. My game grows so much playing at this level.’’

Following the win at the Bay Area event the team went 6-0 to win the EOT Summer Swoosh championship in Orange County. Jump averaged 11 points over the six games.

The Cal Stars team includes elite players such as Aquira DeCosta (St. Mary’s-Stockton), the 2018 No. 1 rated wing in the country according to ESPN, and Mitty’s Haley Jones, ESPN’s No. 2 rated wing for the class of 2019.

Nevertheless, Jump made a name for herself.

“Hannah made shot after shot in front of hundreds of college coaches and against the top defenders in the country,’’ said Stars coach Kelly Sopak, also the head coach at East Bay power Miramonte. “I can honestly say I’m not sure I have coached or coached against a more prolific shooter than Hannah Jump. She is a once in a lifetime talent with a bright future.’’

According to Sopak, a short list of colleges to have expressed an interest in Jump include Stanford, Cal, Notre Dame, Washington, Tennessee, Arizona, USC, UCLA and Oregon.

But more immediately are Jump’s two final years of high school at Pinewood.

“The Pinewood girls are like my second family,’’ Jump said. “We’re all very close.’’

Jump led Pinewood in scoring at 15.5 points per game last season as a sophomore and led the Central Coast Section in 3-pointers with 100. The Panthers went 25-4 and finished the season ranked No. 5 in the state by MaxPreps.

“We’re young this year,’’ Jump said. “We’ll have four or five freshmen, but the freshmen are all good. I think we’ll be real good again. We’ll have a lot of depth so we could be even better than last year.’’

Coronavirus: Plan ahead now for a big outbreak
By Diana Diamond | 19 comments | 4,106 views

Will the Coronavirus Save Lives?
By Sherry Listgarten | 29 comments | 3,868 views