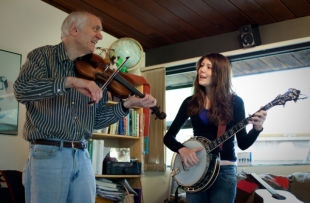 Molly Tuttle, right, practices with her father, John Tuttle out of their Midtown home in 2010. Molly Tuttle was nominated for three awards from the International Bluegrass Music Association this week. Weekly file photo.

Lindsay Joye is a registered user.


Congratulations to Molly Tuttle who we were fortunate to see perform last weekend in SF. It was a delightful evening with her band, the Goodbye Girls, and each performer shone brightly, but it was Molly's voice that really shook the room.

At the performance they said she is the FIRST FEMALE to be nominated for the "Instrumental Performer of the Year - Guitar" category!!!

Best wishes for your career Molly!