Relics prove to be grand masters of ultimate frisbee 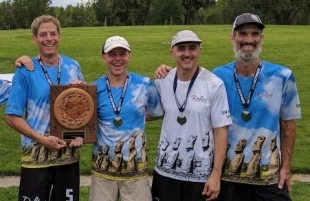 Congratulations to the Relics! Great team and team spirit!

The greatgrandmasters tournament was a wonderful experience. Eleven teams from across the country competing as if they were in their twenties again. Long live ultimate frisbee.

Congratulations to the Relics for proving that you're only as ancient as you feel! Nice work!