Police seek person of interest in series of suspicious fires

Four separate blazes occur within a 1-mile span near downtown 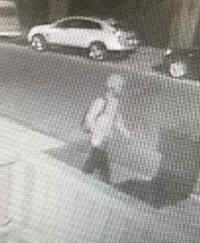 A surveillance camera captured a person of interest in a series of suspicious fires that broke out between 2 and 6 a.m. on July 28, 2017. Photo courtesy Palo Alto police.