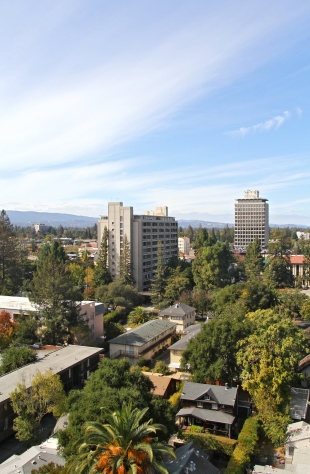 A view of downtown Palo Alto as seen from the rooftop of Channing House. Photo by Veronica Weber.

• View all sections of this cover story with photos here.

In his "State of the City" speech on Feb. 8 — a talk normally confined to highlighting the City Council's recent accomplishments and annual priorities — Palo Alto Mayor Greg Scharff took a detour to address an unusually heated and convoluted meeting that had taken place the prior week.

In deliberating over an update to the city's guiding land-use document, the Comprehensive Plan, the council voted to abolish downtown's limit on new development and remove any mention of height limits for buildings. Most controversially, it decided on a 5-4 vote to strip all programs from the plan, a decision that sparked such a community backlash that the council later reversed it.

Despite these actions, which took many in the community by surprise, Scharff assured the crowd at HanaHaus that the sudden changes wouldn't dramatically impact the Comprehensive Plan, a vision document that some regard as the city's "constitution."

"No one will see every policy or implementation program they want in the plan, but I'm confident that the finished product will not be vastly ideologically different from the current plan we have, and that it will accurately reflect our collective vision for Palo Alto in 2030," Scharff said.

His speech came at a transition point for the Comprehensive Plan update. Launched in 2006, the process has been undermined by political indifference, disagreements about the preferred approach and laborious copyediting by a group of planning commissioners with little input from the council or the community.

Then this year, the update process jumped into warp speed — and then some. Between January and this week, council members introduced and approved new Comprehensive Plan policies that had not been previously discussed, much less vetted, including ones calling for less required parking for new multifamily housing in areas served by public transit and allowing more dense new hotels.

Earlier this month, the council hit a critical milestone when it approved the plan's two most critical chapters (or elements): Land Use and Transportation.

Now, if things go as planned, the updated document will be adopted later this year, paving the way for new zoning policies and — ultimately — development projects.

As this "collective vision" comes into focus, residents on both sides of the political divide are becoming increasingly engaged. Hundreds have attended recent public hearings on the Comprehensive Plan or submitted letters to the council advocating for or against policies. A growing coalition of housing advocates, buoyed by last November's council election, is calling for the council to "go big" on housing.

Diane Morin, member of the citizens group Palo Alto Forward, told the council in March that the city needs to have "diverse housing for the diverse community that has come to Palo Alto and to help regional needs." Judy Kleinberg, president of the Palo Alto Chamber of Commerce, urged council members to "be bold."

"Let's get housing downtown, near transit, and let's help solve this housing imbalance," Kleinberg said at the hearing.

At the other end of the political spectrum are those who believe the city needs to focus less on building and more on existing "quality of life" issues — parking shortages, traffic jams and unwelcome urbanization.

Joe Hirsch, a Barron Park neighborhood resident who co-founded the group Palo Altans for Sensible Zoning, told the council at the same meeting that the city needs to "focus on the needs of current residents who are here and now." More growth and more people means more cars and worsening gridlock, Hirsch said.

"Have a plan in place that will mitigate the problems we have now and then gradually expand housing to the extent it can be accommodated without adversely affecting the quality of life for all of us — those who are here and now and those who will come afterwards," Hirsch said.

While much work remains to be done, the blurry outlines of the "collective vision" Scharff cited began to crystallize this month. Over a dizzying series of page-long motions, amendments, substitute motions and counter-amendments that at times left council members wondering what they were voting on, the council swiftly adopted policy changes. Those changes — large and small — promise to alter the city's path between now and 2030 and, in many ways, belie Scharff's claim that the new plan will not be much different from the current one.

So, what exactly should residents expect to see in the new vision? Find out what the council is looking to change in the areas of development, building height limit, housing, transportation and business.

Not sure why downtown has to eat all the proposed development. Crescent Park is close to transit. Old PA is close to the train with nice, roomy lots. Let's cram a few big tall developments in there, since zoning is no longer an issue.

@Downtown before it was trendy

I like your ideas, but I suspect your tongue was in your cheek when you made them. Those people you speak of, Crescent Park and Old PA owners, love their big lots and wouldn't ever allow building like you suggest to get close to them. They also will not be ones to add ADU's to their properties. That idea is targeted for us folks on lot sizes of 5,000 sq ft or more, and people in need of staying above water and earning extra income to pay off mortgages. The people you mentioned, I'm guessing, have lots of money and that is not even a consideration.

7 people like this
Posted by Longtime Resident
a resident of Leland Manor/Garland Drive
on May 19, 2017 at 1:59 pm

The biggest problem is that the "vision" keeps changing, depending on when and who is asked for opinions regarding what they want to see.

We went to meetings for the Comprehensive Plan, over 20 years ago, and again, about 10 years ago. Little if anything was ever implemented. In fact, the city's 'vision' back then was totally disregarded, and some actions taken were the opposite of what was in the city's own documented plan.

Palo Alto just likes its meetings, and its periods of "community outreach".
But our officials just record comments and then they wait until the current group of people gets tired of waiting (10-20 years) they move or they die, replaced by the next group of people that play Palo Alto's most favorite game: 'reaching out to the public/civic engagement'.

Our advice to those that hold hope in this new project is to not hold your breath that anything will be done. You will, however be heard. What you say will even be on record and found, if a person digs deep enough into the City Hall coffers and under the title of "Employee's Busy Work" to be done, before a department head's retirement. That's Palo Alto. Tolerate it, or leave it.

Report Objectionable Content
Email Town Square Moderator
3 people like this
Posted by Linda
a resident of Menlo Park
on May 19, 2017 at 9:14 pm

Well (also long time resident of PA )several top PA planning department officials moved on to work for big local developers. One Stanford, one Sharon Heights area.. How do you get the hired staff to protect the harms of development to the community? Is there a study on how many people access (crowded ) public transportation and go without using or having cars around here ?

Will the Coronavirus Save Lives?
By Sherry Listgarten | 27 comments | 3,567 views