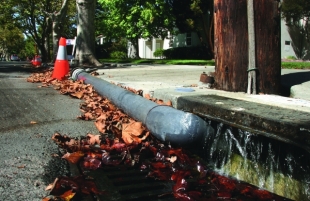 A constant flow of groundwater is being pumped into the drain at the corner of N. California Ave. and Bryant St. due to ongoing home construction down the block. Photo taken Oct. 11, 2010, by Veronica Weber.

My thanks to Lydia Kou and Karen Holman tor trying to get the council to take action and not continue "analysis and studies" for the obvious. Over 20 speakers, and not one person spoke in favor of dewatering, - The compromise Scarff created was one of business as usual - put off an immediate decision, study/evaluate. Maybe even hire another expensive consultant (my comment) to research an alternative method of building basements that has already proven to work and save ground water.

I am not a rocket scientist- but every article I read regarding space exploration, finding new planets etc, the mention of finding water is always of prime importance. . Water means the possibility of life -------and on this mother ship we are flushing it down the drain by the gallons so that a basement can be added to an existing 3-5,000sq ft home..

It has been a while since I went to a council meeting, my patience threshold is low.. Tonite I was amazed by the rudeness of many council members. No, I don't know how they ' listen", only a majority were working on their computers, reading something on their computers, looking through papers while residents took their time, wrote down their thoughts and got up to speak. The least the council members could do, at a minimum, is "look" like they are active listeners.....and I know I was not the only one who noticed or commented on this behavior.

As shown by last night's vote, Council is beginning to hear our concerns. There were nearly 100 supporters of Save Palo Alto's Groundwater in the crowd, and over 30 submitted speaker cards. Thank you to all who took the time to show up.

In addition to voluntary actions by contractors, further Enhancements to the regulations for 2018 will be important to more comprehensively address this issue.

If you care about this issue:
1) Save Palo Alto's Groundwater has a blog covering this topic, including reference materials:
Web Link

2) Send an e-mail with your name to be added to blog update list to
info@savepaloaltosgroundwater.org


Report Objectionable Content
Email Town Square Moderator
16 people like this
Posted by Annette
a resident of College Terrace
on Mar 8, 2017 at 11:43 am


I attended last night's meeting. This article left out a highlight of the public comments: a very bright THIRD GRADER was the first speaker and she made a compelling case for the more aggressive approach supported by Kou, Holman, and Dubois. Good for them for trying. While the subject gets gnawed on for another who-knows-how-long some in our community will be dealing directly w/the impact of dewatering. One woman mentioned that her home is adjacent to THREE homes slated to dig a basement this year. If I heard correctly, each basement is larger than her house. She is understandably concerned. Another woman asked "who do I go after" if something does go wrong. It's hard to square Council's "compromise" with the magnitude of the issue. Hopefully they will not wait until 2018 to implement the "greater changes".

Also, the way the mayor conducted the meeting after public comments wrapped up was reminiscent of what happened on Jan. 30.

Report Objectionable Content
Email Town Square Moderator
19 people like this
Posted by Online Name
a resident of Embarcadero Oaks/Leland
on Mar 8, 2017 at 12:26 pm

Thanks to all those involved. Better late than never. I was getting so tired of getting preached to about saving water while watching the water run down the streets.

Report Objectionable Content
Email Town Square Moderator
6 people like this
Posted by Plane Speaker
a resident of Crescent Park
on Mar 8, 2017 at 11:30 pm

I can't believe the people could really understand this issue and vote
to restrict "dewatering". Democracy can be an ugly thing when it is
driven by political lack of information and propaganda. Booooo!

Report Objectionable Content
Email Town Square Moderator
2 people like this
Posted by Curmudgeon
a resident of Downtown North
on Mar 9, 2017 at 5:08 pm

They evidently did, and so they did.

Basements are fine, but keep them and their effects on your own property. Nobody has a right to just divert (just take) anything, including groundwater, from their neighbors' properties.

Property rights, get it?

Report Objectionable Content
Email Town Square Moderator
1 person likes this
Posted by Me 2
a resident of Old Palo Alto
on Mar 10, 2017 at 10:56 am

Flying: How to lower your impact
By Sherry Listgarten | 19 comments | 3,220 views