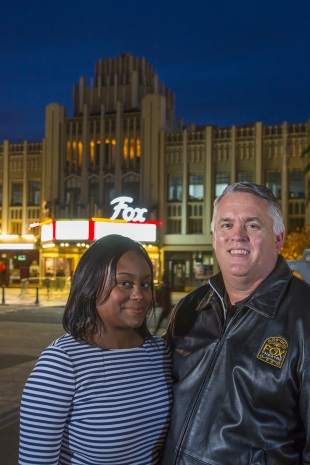 Lori and Eric Lochtefeld in front of the Fox Theatre, which they bought six years ago out of foreclosure and recently sold to Peter Pau of Menlo Park's Sand Hill Property. (Photo by Jim Kirkland)

Peter Pau of Atherton, principal and founder of Menlo Park's Sand Hill Properties, has acquired Redwood City's Fox Theatre, it was announced on Feb. 28. Former owners Eric and Lori Lochtefeld will continue to run the theater for at least four more years.

The Lochtefelds purchased the Fox out of foreclosure for $6 million six years ago with a Small Business Administration loan, Mr. Lochetefeld said. Their asking price for the theater was $20 million and they received multiple offers for the property, he said, but they are not releasing the sales price.

He said they chose Mr. Pau as the new owner in part because he wants to continue to operate the theater as an entertainment venue.

In a statement Mr. Pau said he sees "the Fox Theatre as the crown jewel of Redwood City real estate" and that he appreciates the historic architecture and character of the building. Mr. Pau said he hopes to use the theater to host many nonprofit events.

Mr. Lochtefeld, who grew up in Menlo Park, said the theater will continue to operate as it has, as will the neighboring music venue, Club Fox, which is run by his brother, Charley Lochtefeld.

Because the Fox Theatre has removable seats, it can serve as a sit-down event venue for up to 280 people at tables, as well as for entertainment events, he said.

"It almost felt like a full-time job focusing on the vibrancy of downtown," he said.

"My wife and I poured our heart and soul into making this theater successful," he said, and made sure they found a buyer who would preserve the theater. "We knew (Mr. Pau) was the right buyer from the beginning," Mr. Lochtefeld said.

The Lochtefelds also own the Golden State Theatre in Monterey.

A Pragmatic Approach to A Trillion Trees
By Sherry Listgarten | 3 comments | 3,824 views

The University of California’s flexible policies during COVID-19
By John Raftrey and Lori McCormick | 6 comments | 2,553 views

Repairing a Disagreement with your Beloved & “Physical” vs. “Social” Distancing
By Chandrama Anderson | 2 comments | 2,536 views