Some Palo Alto and Mountain View routes to be kept, others combined or eliminated 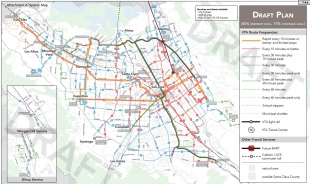 See the full map at tinyurl.com/vtaPA0117.

When will these changes take place? We have a foreign visitor living with us in Midtown who takes the 88 bus to work at the VA Hospital every day. The proposed schedule change would make that line unusable for her, and she would need to take Uber every day, at much greater expense.

9 people like this
Posted by Resident
a resident of Another Palo Alto neighborhood
on Jan 5, 2017 at 9:34 am

It is with great sadness I read this report. The good news is that the bus to Gunn should be saved, that should be a no brainer.

But I see so much lack of foresight in this. All the talk about how we should plan for the future is based on what has happened in the past. I see nothing about attracting new riders, nothing about promoting various routes as a great alternative to solo driving, nothing about liaising with other transport agencies, nothing about how to serve riders who need to cross county lines and nothing to get commuters to Caltrain or from off ramp carpool parking lots to business areas. I see some riders being told to use two buses (and two fares) instead of one where there are changes being made.

This could be a step in the right direction. Instead I see it as a step backwards. This will cause more traffic on the roads and cause more people to shun public transport because it doesn't meet their needs.

"The agency has said it must decrease coverage throughout the county to increase ridership, and thus its revenues."

Lessee now...VTA thinks it will get more riders and revenue if it goes to fewer places where riders are.

Report Objectionable Content
Email Town Square Moderator
11 people like this
Posted by Eejits
a resident of Midtown
on Jan 5, 2017 at 11:56 am

Eejits is a registered user.


It would help if PAUSD would bring back school buses, particularly for the kids who live in the hills of Palo Alto and Los Altos. Then VTA could get rid of those routes and save some of the others. Cut back on traffic, too, from parents driving kids to school because they're afraid for them to ride a VTA bus.

Their faulty and idiotic logic on cutting routes to make more money shows that VTA has become an Idiocracy-- a bureaucracy run by idiots!

Report Objectionable Content
Email Town Square Moderator
21 people like this
Posted by Resident
a resident of Charleston Gardens
on Jan 5, 2017 at 12:30 pm

Hmmm, Maybe WE should compromise and stop voting to fund taxes to support VTA to expand services, when they actually then go out and immediately reduce bus services in our community. Apparently they're not that interested in us as customers, so they're probably not that interested in us as voters or funders either. Santa Clara County voters just approved sales tax increase for VTA to increase services, and the ink is barely dry from that election. Amazing that voters are this gullible. And I can probably guess on the Palo Alto voters that flocked to support that tax. Probably the same winners that support the roadblocks on Charlston/Arastradero making it practically impassible from 7am to 7pm every day.

Report Objectionable Content
Email Town Square Moderator
2 people like this
Posted by maguro_01
a resident of Mountain View
on Jan 5, 2017 at 4:49 pm

These changes do seem reasonable; some people just complain when anything changes at all. No one can expect the world to freeze around them and where they live until they decide to leave or get carried out in a box, to be straightforward about it.

The article does mention VTA not being able to compete with a free bus. Was Marguerite started as a trade for some Stanford Project or the like? That's nice, but that kind of thing does need to be coordinated with VTA or any other parallel service. We seem to have a number of shuttle buses now, or at least we do in Mountain View. VTA should be at least notified about the advent of such services and be free to connect with them and deploy their resources a bit differently, offering better service somewhere else.

I understand people's need for stability and being able to plan. Where people live and work is hard to change and are major decisions to make. With rents and house prices where they are around here, major damage to individuals can result from simple withdrawal of service

I believe that computer simulations of transit systems exist and could serve to make a more unified overall system with less redundancy and fewer dead areas. Services are likely running computer aided dispatch, tracking, and communication systems that could be in common. Are the services we have over-bureaucratized? Buses should be much more adaptable to change than rail services and the buses can be feeder lines.

Also, the only VTA bus I've been on that would be questionable for, say, 6th grade up would be Hotel 22. But how many 6th grade up students travel after midnight on cold nights? Kids go to school at least Middle School up on S.F.'s MUNI buses during the day routinely. Do people really think that Chinese-Americans or Hispanic-Americans don't really care what happens to their kids? Maybe some people around here need to get over being Masters Of The Universe. Their kids would be better off, just as safe, and more ready for their future world.

ps - The changes to the Winchester and Santa Theresa light rail lines are especially useful for Mountain View residents.

Report Objectionable Content
Email Town Square Moderator
6 people like this
Posted by Robert Neff
a resident of Midtown
on Jan 5, 2017 at 10:57 pm

Thank you for covering this!

@Maguro_01 - I have seen large numbers of middle school kids riding the 22 in Mountain View, to get from around Grant to Castro, on their way to the middle school on Castro.

At the same meeting tonight the VTA board was apparently moving forward on changing the fare structure, so that the cost of a transfer would be either low cost or free at some point in 2017. That has been much easier since the arrival of Clipper Cards, but it took pointing the current transfer penalty out by the consultant who worked on the new network to get this change going.

When the 22 service is reduced in favor of the 522, that will be a downgrade of local service in Mountain View and Palo Alto, and the 522 stops are too far apart at this end of its route. From East SJ to SJ downtown 522 stops are never more than 1 mile, and some less than 1/2 mile. From downtown Palo Alto to Bernardo in Sunnyvale there are only 4 intermediate stops, and 4 gaps of 1.7 miles each between stops. Palo Alto and Mountain View should lobby for about 4 more 522 bus stops to fill these gaps.

6 people like this
Posted by Resident
a resident of Another Palo Alto neighborhood
on Jan 11, 2017 at 2:04 pm

Where is City Council on this?

Is there anyone from City Hall involved in talking with VTA?

Is there anyone from the PAUSD involved in talking with VTA?

Since they say they are hoping to get people linked to BART, is there any plan to offer a VTA service across the Dumbarton to BART in East Bay?

Is there any plan to get neighborhoods linked to Caltrain and coordinate with Caltrain schedules?

Is there any plan for neighborhood routes rather than the long routes to San Jose?

Is there any plan for linking Palo Alto to Foothill College?

Is there any plan for future development needs rather than looking at historical ridership figures?

Why are these questions not being addressed by VTA?


Report Objectionable Content
Email Town Square Moderator
4 people like this
Posted by Online Name
a resident of Embarcadero Oaks/Leland
on Jan 13, 2017 at 12:02 pm

It was reported elsewhere that the VTA felt that the existence of the Palo Alto shuttles justified cutting PA service because we're already served.

Isn't it great that we get stuck paying for both the extra sales tax and the empty PA shuttles that can't be scheduled to take kids to school and other desired destinations.

A little coordination among the highly paid bureaucrats, the City Council and PA's pontificating commissions would be special.

You Can Help: Scents and Migraines
By Chandrama Anderson | 0 comments | 1,867 views