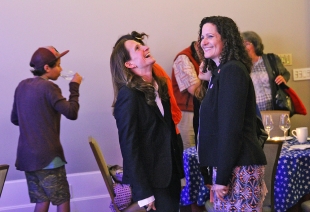 Marc Vincenti is a registered user.


Save the 2,008--the 550-strong community alliance founded two years back by a Gunn sophomore and a teacher, and christened for the number of students and faculty at their school--salutes the Weekly for its remarkable, comprehensive, and consistent coverage of local education, sends good wishes to Todd Collins, Jennifer DiBrienza, and Melissa Baten Caswell for their upcoming terms on the board, and invites any and all Palo Altans to join us in creating high schools less filled with stress, more filled with trust, connection and hope. All it takes is the keystrokes of your name at savethe2008.com. (And Happy New Year!)

Can you Pay to Reduce your Carbon Footprint?
By Sherry Listgarten | 10 comments | 2,405 views

You Can Help: Scents and Migraines
By Chandrama Anderson | 0 comments | 2,045 views