Palo Alto's best, worst and most outrageous moments that defined the year 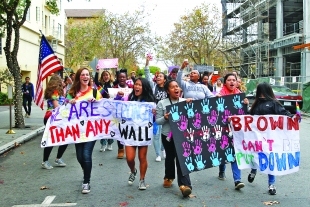 The most inspiring moment of 2016: Students from Palo Alto Gunn and Castilleja high schools march down Cowper Avenue in downtown Palo Alto on Nov. 15 during a student-organized rally following the presidential election. Photo by Veronica Weber.

And so Palo Alto Weekly inadvertently displays one of the national news stories of the year - manipulation of the media - in its repeating the Downing grandstanding without any perspective on its veracity, and thus normalizing false claims.

Downing clearly COULD afford to live in Palo Alto, just not in the syle she apparently wanted to be accustomed right out of school. Large single-family homes were, to her, immoral, but only when anyone else besides her and her husband lived in them. You wouldn't even sniff the false claims or gross hypocrisy from that re-whitewasing above. If you want to cover housing, cover housing, and be balanced about it. Don't allow a Trump-like manipulation of media by Downing for the sake of a personal agenda. I seem to recall a post asking people to talk about how they got into the local housing market, especially by people with nowhere near the means of Downing, and there were many common themes - why hasn't the Weekly ever bothered to cover that?

The unaffordability of Palo Alto is an old story, but the "hollowing out" that is happening now is the result of the Council allowing overrunning of Palo Alto by companies like Downing's husband's employer Palantir. (Speaking of LOTR, makes me think of the Shire after Saruman/Sharkey take over.) These companies do not contribute to the vitality of Palo Alto, in fact, have seriously hurt the quality of life here, do not pay their way, and strain infrastructure in a way that is scary if there is an emergency (Think about the massive gridlock just from an accident on Dumbarton, imagine a real emergency.)

The jobs housing imbalance is the fault of Council alright, but the answer is reducing the footprint of companies, especially in areas where they were never zoned for office space. If the recent election wasn't enough of a reminder, this nation would be far better off if we did not try to pack all the jobs here. We need to make Palo Alto startup friendly again, especially given prroximity to Stanford. We should not be facilitating companies to take over downtown and shut out that innovation, and residents. Facebook grew and left Palo Alto. It was a good move all around. The serious issue of the Council favoring the takeover of Palo Alto at the expense of residents (literally, see the news story about how residents are subsidizing development costs even at the city level) never gets dealt with when the local news lets itself be manipulated by Downing and associates that way. THAT was the real story, not flash-in-the-pan Downing whose attacks on Palo Alto served as a great diversion from her hypocrisy and ditching her responsibilities on the planning commission as soon as she got the big single family home.

Three stories only? One serious and dealt with in the above comment, one humorous as well as having a serious side, and one a reaction to a national situation.

However, there are long ongoing problems such as Caltrain grade separation not dealt with and 2016 has to have included a couple of these. Any time there is an issue with a vehicle or individual on the tracks, the question of undergrounding or raising the tracks or perhaps a combination of the two is mentioned by almost all commenters and gets ignored by the Weekly, by the City Council and by Caltrain.

When will this serious issue be addressed?

Report Objectionable Content
Email Town Square Moderator
25 people like this
Posted by Anon
a resident of Another Palo Alto neighborhood
on Dec 27, 2016 at 12:57 pm

If I never hear of Poster-child for the Priveliged, K Downing ever again, it will be a happy new year. I look forward to her eventually identifying with Santa Cruz more than Palo Alto. Here, after demanding that housing she wanted should by tight be available to her, moved and bought a big $1.5 million ocean view home.
I never here her speak for the housing needs of actual low income Palo Altans, Buena Vistans. Only for gold plated professionals such as herself, often stating inacurrate info about city zoning and land use to an uncritical social and national media.
Let this end the attention her way.

Report Objectionable Content
Email Town Square Moderator
3 people like this
Posted by Resident
a resident of Greater Miranda
on Dec 30, 2016 at 3:06 pm

The student protest was NOT the inspiring event of the year. This entire list sounds like propaganda rather than a genuine recollection of this riveting year.

Report Objectionable Content
Email Town Square Moderator
4 people like this
Posted by Puhleeze
a resident of Downtown North
on Dec 30, 2016 at 3:54 pm

Report Objectionable Content
Email Town Square Moderator
2 people like this
Posted by Homeowner
a resident of Another Palo Alto neighborhood
on Jan 2, 2017 at 5:25 pm

If stopping office development makes a city less expensive, Atherton would be the cheapest place to live on the Peninsula.

Let's keep Palo Alto a growing, thriving city focused on the future. Kate Downing said things a lot of people didn't want to hear, but she's right - it's Palo Alto's tight restrictions on housing that make it so expensive to live here.

Now that the people have spoken and we have a new Council, I hope we can see some of those restrictions lifted.

Report Objectionable Content
Email Town Square Moderator
3 people like this
Posted by Atherton???
a resident of Another Palo Alto neighborhood
on Jan 2, 2017 at 6:55 pm

Atherton IS cheaper on a square foot basis. It's just that Atherton has larger houses on larger lots. But you get more for your money in Atherton and Woodside because of the lower price per square foot. This is also true of Portola Valley.

Fifteen, twenty years ago you could raise a family there just by being moderately rich - a successful VC, an early startup employee. Now you have to do all that and inherit money, too. (I have several friends in their thirties who are raising families in Atherton, and they all fit that description.)

Let's make sure Palo Alto doesn't devolve into that. Let's get some more four-story condos in downtown, near California Ave, and on El Camino. Let's get some housing in the Stanford Research Park, or by the Mall. And let's let this new affordable housing complex near Cal Ave go through instead of blocking it.

Anne Le Ziblatt, formerly of Tamarine and Bong Su, is back with a Vietnamese noodle bar in Redwood City
By Elena Kadvany | 7 comments | 3,656 views

You Can Help: Scents and Migraines
By Chandrama Anderson | 0 comments | 981 views