Sheriff Laurie Smith: 'He should be in prison right now' 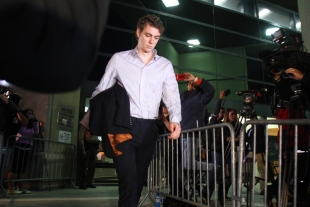 Head down and silent, flanked on both sides by crowds of reporters, TV crews and cameras, former Stanford University student-athlete Brock Turner briskly walked out of the front door of the Santa Clara County Main Jail in San Jose at about 6 a.m. Friday, ending his three-month incarceration for the sexual assault of an unconscious and intoxicated woman.

Turner, who Santa Clara County Sheriff Laurie Smith said had been in protective custody throughout his sentence, did not speak to any media, and quickly got into an SUV that had pulled in front of the jail minutes before his release.

There were few protesters at the jail in the early morning hours, save two men and one woman who told reporters they opposed Turner’s sentence, but more were expected later Friday morning. A scheduled rally organized by the campaign to recall the judge that sentenced Turner, Aaron Persky, took place at 10 a.m.

"We're done with him; he's gone; he should be in prison right now," Smith told reporters after Turner was released.

She said that Turner, who turned 21 in jail, received no special treatment for his release.

Turner was arrested in January 2015 after two Stanford graduate students found him on top of an unmoving young woman outside of a Stanford fraternity party. Turner later pleaded not guilty to the crimes he was charged with and testified that the woman consented to the sexual activity they engaged in.

Persky sentenced Turner to six months in county jail, though Turned had faced a maximum of 14 years in state prison and the prosecution had asked for a six-year sentence. Turner served half of his jail time based on a practice by which inmates get credit for good behavior.

Smith repeatedly expressed her support for new legislation inspired by the Turner case that would eliminate the possibility of probation and establish a mandatory prison sentence of three to eight years for anyone convicted of sexually assaulting an unconscious person. Assembly Bill 2888, which just passed the Assembly this week and is now on Gov. Jerry Brown's desk, would also make the consequences for rape and sexual assault of a person who is unconscious or incapable of giving consent due to intoxication the same as for a conscious person.

"As the sheriff of Santa Clara County and a mother I believe that the interests of justice are best served by ensuring that sexual predators are sent to prison as punishment for their crime," Smith wrote in an Aug. 31 letter to Brown, copies of which deputies handed out to the media early Friday morning. "Victims of these types of sexual assaults struggle for years to cope with the damage done to their lives, and knowing that there is a more just punishment to those that perpetrated these assaults may provide solace to these victims."

It was the victim in the Turner case, a young woman known anonymously as Emily Doe, who ignited a firestorm of activism, outrage and awareness around this case and around campus sexual assault more broadly. In her 12-page victim impact statement, which she read in part in court at Turner’s June 2 sentencing in Palo Alto, she called the probation officer's recommended sentence of a year or less in county jail "a soft time-out, a mockery of the seriousness of his assaults, and of the consequences of the pain I have been forced to endure."

"The seriousness of rape has to be communicated clearly, we should not create a culture that suggests we learn that rape is wrong through trial and error," she wrote.

Santa Clara County District Attorney Jeff Rosen also put out a statement Friday morning: "If we had our way, Brock Turner would be in state prison serving a six year sentence, not going home."

"However, our focus today is on a bill that will require a state prison sentence, not probation, for anyone convicted of sexually assaulting an unconscious person. With the Governor’s signature, the next Brock Turner will go to prison," Rosen wrote.

Stanford, for its part, released early Friday morning a Q&A on sexual violence with Lauren Schoenthaler, former general counsel and now senior associate vice provost for institutional equity and access for the university. In it, she writes that "Stanford has no official position on the prosecution, the sentence or the recall effort, because we have an institutional policy of non-interference in criminal prosecutions."

Turner will now serve out the remainder of his sentencing terms: three years of probation and lifetime registration as a sex offender. His probation has been transferred to his home state of Ohio, his former criminal attorney Mike Armstrong confirmed to the Weekly.

Dennis Riordan, a well-known San Francisco appellate attorney, filed a notice of appeal on Turner's behalf just after his sentencing, but he told the Weekly he is no longer representing the former Stanford athlete. A court-appointed appellate lawyer, Solomon Wollack, is now representing Turner in his appeal, according to court records.

The Palo Alto Weekly has created Storify pages to capture ongoing coverage of the Brock Turner case as well as sexual-assault issues at Stanford University. To view them, go to storify.com/paloaltoweekly.

Mauve is a registered user.


I was relieved to read that his 3 year probation was successfully transferred to Ohio so we won't be seeing him around Santa Clara County.

Sarah1000 is a registered user.


Rape survivor, Gabrielle Union, wrote an op ed piece in the LA Times that is worth reading.

12 people like this
Posted by BillyBob
a resident of Another Palo Alto neighborhood
on Sep 2, 2016 at 8:21 pm

BillyBob is a registered user.


After all of this, he is still fighting to appeal his sentence, rather than doing anything to make amends or demonstrate that he recognizes his actions were wrong and that he profoundly hurt someone.

Report Objectionable Content
Email Town Square Moderator
3 people like this
Posted by TTSF
a resident of Stanford
on Sep 3, 2016 at 12:26 am

TTSF is a registered user.


Seeing the Dennis Riordan who is probably the best appellate attorney in CA has left the case leads me to believe maybe there are no grounds for appeal....I guess time will tell

These local restaurants are donating meals to Bay Area residents in need. Here's how to help.
By Elena Kadvany | 6 comments | 10,679 views

Coronavirus: Plan ahead now for a big outbreak
By Diana Diamond | 17 comments | 3,766 views

Will the Coronavirus Save Lives?
By Sherry Listgarten | 27 comments | 3,623 views