Documenting the holocaust of 1947 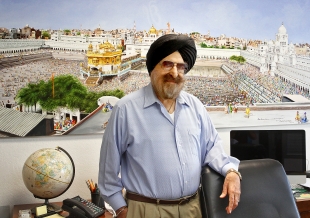 Narinder Kapany stands in his office where a large painting of the Sri Harmandir Sahib known as the "Golden Temple" in Amritsar, India, hangs above his desk. The temple is one of the holiest of sites for Sikhs, located in the Punjab region of the country. Photo by Veronica Weber.

Contributing Writer Chris Kenrick can be emailed at ckenrick@paweekly.com.

As a teacher thank you very much for this archive, an excellent resource for my class!

3 people like this
Posted by Charles Wilson George
a resident of Downtown North
on Aug 7, 2016 at 2:38 am


Since the Indian/Pakistan Partiion took place right at the end of WWII, when much of the whole world was licking its wounds and trying to simply feed itself, the Parttion probably was not carried in any great detail in other than the UK media.

The following BBC documentary about the Partition offers a very comprehensive view of the events leading up to, and after, the exit of the British and the migration of Muslims and Hindus to/from India and the newly-minted Pakistan:

Somewhere between 1.5M and 2M people were killed in the fighting that transpired during the Partition. Such carnage is hard to fathom--but it happened between the Muslims and the Hindus who make up the bulk of the population of the two countries.

Thank you, Charles. I had watched that BBC documentary before, but you brought it back to my attention. You forgot to mention the Sikhs, who were also caught in the vice. It was a sobering message.

Thank you so much for this inspiring article. The story definitely needs to be told.

Both of my parents migrated to Pakistan. My mother lost her mother and her childhood and she still cries about it.

The brief and poignant narratives of the survivors of 1947 Partition shows man's inhumanity to man is unending. India's struggle for Independence from a brutal colonial rule led to the ethnic cleansing of the helpless and the innocent.

This thought provoking essay has awakened dormant emotions of love and compassion for my fellow human-beings.
Even in today's world we see so much killing and displaced refugees that there is a sore need of mutual respect and understanding between all races, religions and sects.

Hope and pray we discover universal encompassing love for all, that will connect us in our rich diversity.

Flying: How to lower your impact
By Sherry Listgarten | 7 comments | 1,830 views