Pursuing the rocky path to college 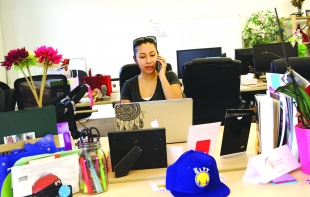 Sarahi talks on the phone while working at the DREAMer's Roadmap desk space at the Stanford Latino Entrepreneurship Initiative in Palo Alto on Feb. 9. Photo by Veronica Weber.

"She then returned to school, at Canada this time and was able to benefit, as a low-income undocumented student, from California's Board of Governor's fee-waiver program to cover her enrollment costs. She also received support from Canada's Opportunity Programs and Services (EOPS), another state-funded program for which she was eligible, which helped her with books and other miscellaneous college expenses."

Canada College - not Canada the county