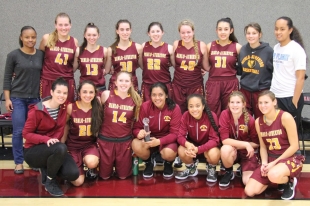 The Menlo-Atherton girls captured the Competitive No. 2 Bracket title at the Eastside Prep Coaches vs. Cancer Classic on Wednesday with a 56-36 win over Granada Hills. Photo by Lara Hoyem.