Help sustain the local news you depend on.

• External review of the district's special-education department and services

• Required use of Schoology by all teachers 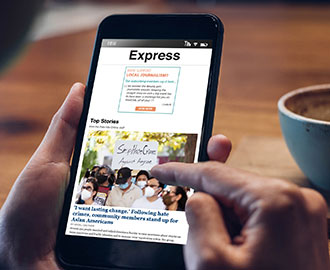 Get the latest local news and information sent straight to your inbox.

Get the latest local news and information sent straight to your inbox.

■ Cody: Santa Clara County's huge rise in COVID cases may have peaked, but is still at record levels

■ Planning commission not swayed by Castilleja's plan to add students

• District involvement in grassroots Save the 2,008 campaign

Check out our new newsletter, the Playbook.

• External review of the district's special-education department and services

• Required use of Schoology by all teachers

• District involvement in grassroots Save the 2,008 campaign

Though I've always loved the sport of limbo, and my chiropractor loves the outcome, and though it's nice to have a place in a realm that's only a baptism away from Heaven, I think that for the Palo Alto record I ought to note that, although Save the 2,008 has amassed 424 signed supporters--including parents, students, teachers, alums, LMFTs, professors of education at Stanford, PAMF physicians, noted authors Vicki Abeles and Alfie Kohn, five rabbis and several ministers, psychiatrists, martial-arts and yoga instructors, a chief health strategist from Google, venture capitalists, Academy Award winning filmmaker Jessica Yu (Gunn,'84), national youth-suicide-prevention activists, etc.--its six proposals have been completely turned away by the P.A.U.S.D. superintendent and school board, with the exception of Ken Dauber, who publicly called Save the 2,008 "a gift to the community."

Warm holiday-time wishes to all,

Marc Vincenti
Campaign Coordinator
Save the 2,008

This is fantastic news! I hope it's enforced. Immediate activation?

If they are forced to adhere to the homework policy, this means 10 minutes per grade level, not including APs/honors, unfortunately, but at least the regular lanes will now be consistent.

"Required use of Schoology by all teachers"

Well, most of this doesn't sound new, but basically okay.

Wonder if there could be a bit less testing to make up for the possible loss of homework time. That strikes me as a sort of a win/win. This constant teaching to the test strikes me as pretty pointless long-term. Even halving the number of tests in most classes would be an improvement. Seriously, I'd rather see a history essay instead of yet-another-multiple-choice exam--and do the essay in class.

As expected, MI gets a slot while the world-language needs of most of the kids gets sidelined yet again. Seriously, I was reading the complaints about Spanish in the middle schools and the high schools--kids would have a much easier time of it if they were exposed to Spanish or French or whatever a couple of times a week in school or after school during the elementary school years. Just don't know why it's not more widely available and why it's so impossible to implement a simple program. Ohlone afterschool language program doesn't make kids fluent, but it does give them a start--at least they know what a foreign language is.

Approve of all the no-gos--can't believe people are still fussing about losing academic zero period given what's happened here.

Why did most of the comments here disappear? I noticed awhile ago, but thought it would get fixed...