2015 was a year of successful citizen activism 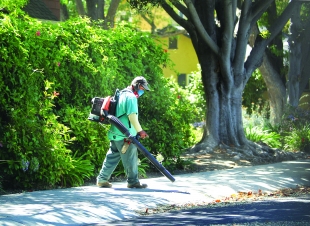 A gardener uses a gas-powered leaf blower to clear leaves off a sidewalk on July 23. Photo by Veronica Weber.

More than nine months have passed since Fresh Market shuttered it's doors and more than three months since the (premature) report of Andronico's occupying the space. Yet, still no evidence of progress towards a grocery store in this location. Nothing. Nada. Meanwhile, housing units in this development - that the city only allowed to be built in exchange for public benefit of securing a grocer - have been sold. The developer has failed to honor guarantees made in his agreement with the city to locate a grocer but has meanwhile reaped $30M from sale of these new homes. The new year marks the 10 year anniversary since Albertson's closed at this location in 2006. Can we please get information (if not resolution) on the progress of occupying this chronically vacant space?

It's been over a year of sleepless nights and a lowered quality of life due to the non-stop whining of airplane noise over our home. I think a continued effort and "fight for change" should be a top priority for our city council in 2016.

24 people like this
Posted by Voices on Housing
a resident of Another Palo Alto neighborhood
on Dec 31, 2015 at 10:57 am

And don't forget important community engagement on housing issues within the city! From rallies to help find housing solutions for the Buena Vista Mobile Home Park to the great turnout at the Comp Plan's Summit event in May, to hearing from residents from all ages and socio economic backgrounds speaking at Council about the need to prioritize the creation of housing units this October and November, it is heartwarming to see so many community members talking about ideas and solutions to this important issue in constructive ways.

Report Objectionable Content
Email Town Square Moderator
28 people like this
Posted by tt
a resident of Another Palo Alto neighborhood
on Dec 31, 2015 at 11:00 am

SFO just broke another record having its 50 millionth traveler this week and with three major arrival routes(sky super highway) to SFO converging over Palo Alto at below 4,000 feet at 80% of the time.

Palo Alto has sadly become the noise dump ground thanks to FAA's flawed next gen roll out.


Report Objectionable Content
Email Town Square Moderator
10 people like this
Posted by Kris Loew
a resident of Charleston Gardens
on Dec 31, 2015 at 11:11 am

I'd also like to add to this list Olenka Villarreal and her tireless, charitable work on Magical Bridge Playground at Mitchell Park. Eight years ago, she saw a desperate need for a playground that would serve those living with disabilities, both physical and cognitive, and she set to work to secure land from the City of Palo Alto, raise private financing, seek expert design and insight from the community, and find a team of volunteers and builders to make her vision come to life. In June 2015, her work was realized with the grand opening of the playground, and this magical play space has since been celebrated by countless people from around the world. I'm proud to be a part of Palo Alto -- where everyday citizens can make extraordinary things happen, like building a playground where everyone can play.

Report Objectionable Content
Email Town Square Moderator
6 people like this
Posted by Art
a resident of Barron Park
on Dec 31, 2015 at 11:12 am

This 2015 year marked a Turning Point Year for Palo Alto in reforming its zoning near industrial sites with Extremely Hazardous Materials. For the past decade, residents who live close to the Research Park have been appealing to City officials to come to terms with the zoning lapse that had allowed CPI to reconstruct its plating facility and increase its stock of extremely hazardous materials without consulting or even notifying the neighborhood.

The issue has taken a long time to resolve. But finally our City government officials, both Staff and Council, recognize that having allowed this facility to be located so close to homes was, in hindsight, an unwise decision. The City Council action in November 2015, and unanimous City Council vote in supporting City Staff recommendation, validates residentsâ€™ long standing position: the current situation poses a risk to nearby residents, is incompatible with good zoning standards and current zoning practices, and changes must be made. The Council agreed to a plan proposed by the Staff and voted to take action.

Report Objectionable Content
Email Town Square Moderator
20 people like this
Posted by Tired of Cronyism
a resident of another community
on Apr 6, 2016 at 12:22 pm

So in sum: New low altitude flight paths and ever increasing flight capacity stopped? No. Groundwater pumping in extended drought conditions halted? No. Grocery store opened? No. Leaf blower EXISTING codes enforced? No. Residential parking and traffic relief? Some. Airbnb violating leasing laws stopped? No. And this translates into success how? And citizens are being represented by our elected officials how? Cronies must be rooted out of our government at every level and real representatives of citizens voted in. We have to move beyond anger and talk and be the change we want to see, for e.g., sick of aircraft low over your homes 24/7: boycott flying and don't receive or ship by air until altitudes are raised and limits placed on capacity.

Airplane noise is highest on my list because it affects quality of life the most: sleep, concentration, peace, relaxation, TV watching, telephone calls. It's nearly all hours of the day and affects the most people in our city. We should be able to come home to peace.

Report Objectionable Content
Email Town Square Moderator
19 people like this
Posted by L'Enfer
a resident of Old Palo Alto
on Apr 6, 2016 at 3:39 pm

L'Enfer is a registered user.


The quality of life has plummeted due to Chinese speculation, the loss of retail, too many offices sprouting up in non-designated areas, fickle-minded zoning changes, ghost houses, over-size McMansions on undersize lots, excessive low-flying air traffic, stressful middle and high schools, and non-citizens allowed all the rights of citizens

Report Objectionable Content
Email Town Square Moderator
14 people like this
Posted by Curmudgeon
a resident of Downtown North
on Apr 6, 2016 at 5:48 pm

"And citizens are being represented by our elected officials how?"

Not very much. The town government is run by the city manager. By law, only the CM can direct staff; elected officials cannot. Couple that with the Brown Act's restrictions on inter-official communications (to the extent they're not subverted), and you have nine elected officials that mainly react to cues from the CM--their nominal employee. Nominal because, although our elected officials hire the CM and are legally required to evaluate the CM's performance annually, they outsource these duties to a consultant at no small expense, and only append to the report their obsequious praise for their master.

Report Objectionable Content
Email Town Square Moderator
34 people like this
Posted by Bogey
a resident of Another Palo Alto neighborhood
on Apr 6, 2016 at 6:56 pm

City Council members sit on a dias, and mix-n-match the limited options spoon fed to them by city Staff, at the direction of the City Manager... this is not leadership.

Palo Alto has become a plantation run by the real-estate industry, and the residents are just sheep to be sheared through higher rents, higher retail prices, and higher taxes.


Report Objectionable Content
Email Town Square Moderator
6 people like this
Posted by Stephanie Enos
a resident of Barron Park
on Apr 7, 2016 at 5:00 pm

I am in agreement with almost all of the comments above. I hope that the city manager takes a look at them. It's a sorry picture for what used to be a very livable city with strong neighborhoods and great outdoor spaces.

Flying: How to lower your impact
By Sherry Listgarten | 10 comments | 2,526 views