City Council sets aside its differences to take on a greater force: the free market 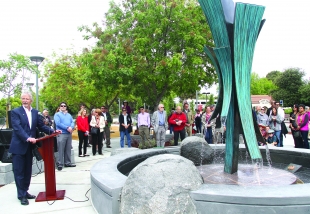 Palo Alto City Manager James Keene speaks about the California Avenue renovation and the conclusion of the construction at the new fountain plaza unveiled on May 7. Photo by Veronica Weber.

This 2015 year marked a Turning Point Year for Palo Alto in reforming its zoning of industrial sites with Extremely Hazardous Materials. For the past decade, residents who live close to the Research Park have been appealing to City officials to come to terms with the zoning lapse that had allowed CPI to reconstruct its plating facility and increase its stock of extremely hazardous materials without consulting or even notifying the neighborhood.

The issue has taken a long time to resolve. But finally our City government officials, both Staff and Council, recognize that having allowed this facility to be located so close to homes was, in hindsight, an unwise decision. The City Council action in November 2015, and unanimous City Council vote in supporting City Staff recommendation, validates residents' long standing position: the current situation poses a risk to nearby residents, is incompatible with good zoning standards and current zoning practices, and changes must be made. The Council agreed to a plan proposed by the Staff and voted to take action.

As someone who was opposed to the California Avenue renovation project it seems to have turned out pretty well. Looks better than before and I haven't noticed a significant impact on traffic due to lane reduction. Though it had some problems with the raised glass in concrete and took longer than expected (what else is new...it's the Palo Alto way) all in all I think most are happy, including merchants who were initially opposed.

Report Objectionable Content
Email Town Square Moderator
5 people like this
Posted by Mark Weiss
a resident of Another Palo Alto neighborhood
on Dec 31, 2015 at 3:02 pm

My rent has gone up 40 percent, since 2008. My landlord would not consider a tenant making less than $50 an hour, fulltime or the equivalence.

Report Objectionable Content
Email Town Square Moderator
4 people like this
Posted by Mark Weiss
a resident of Another Palo Alto neighborhood
on Dec 31, 2015 at 3:06 pm

Report Objectionable Content
Email Town Square Moderator
4 people like this
Posted by Palo Alto
a resident of Woodside
on Dec 31, 2015 at 5:29 pm