Stanford football will be making another run for the roses 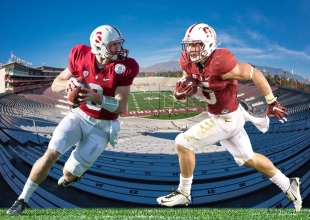 Kevin Hogan may not be the first quarterback taken in the NFL draft in late April, though if leadership and winning are of any importance, he'd have a star hanging by his name.

David Shaw and the Stanford football team swear by the fifth-year senior, who will be leading the fifth-ranked Cardinal (11-2) into its third Rose Bowl in four years on Friday in Pasadena.

Sixth-ranked Iowa (12-1), once a cinch to make the BCS playoffs, will be Stanford's third different Big Ten opponent. Coverage begins at 1:30 p.m., with the game televised by ESPN.

Hogan is about to become the first Pac-12 quarterback to start in three Rose Bowl games. He's 35-10 as a starter, the most ever by a Cardinal signalcaller, and he's the current active leader.

Hogan led Stanford to a pair of bowl game victories in his first three years. Last year may have been a disappointment to many, though the victory over Maryland in the Foster Farms Bowl put a nice touch on a season that began with such high hopes.

"I am not going to apologize for an eight-win season," Shaw said at a preseason press conference in August after his team went 8-5 in 2014.

Anyone who thought an apology was in order needs a history lesson in Stanford football. Before Shaw returned to his alma mater as an assistant coach under Jim Harbaugh, the Cardinal was suffering through its longest stretch of losing seasons in program history.

Under Harbaugh and Shaw, Stanford is experiencing unparalleled success.

"Everyone respects coach Shaw," Cardinal offensive lineman Josh Garnett said. "The team just loves to be around, loves to go out and practice. You definitely feel the excitement from him when you score or do anything. To have a guy that's your commander-in-chief like that, that you can rally behind, really is what makes him so special."

Having Andrew Luck around certainly made things a lot more fun. Luck never had the chance to play in the Rose Bowl, although his imprint can be seen in the process of getting there.

Hogan, who spent his freshman year watching and learning from Luck, is one of eight players who have appeared in at least 50 games for Stanford, with three of those appearances, come Friday, being the Rose Bowl. That's historic.

"It's awesome. It's our goal is to be here each year and to get back down here for a third time is remarkable," Hogan said. "It shows the kind of guys we have on our team, and the coaches we have, and the hard work we put in."

Hogan will be going out with a group of players we'll be watching on Sundays. Garnett leads the way with 54 games after becoming the first true freshman to start on the offensive line at Stanford in over a decade. He became the team's first Outland Trophy winner this season.

"I'm enjoying this with my senior class," Hogan said. "It shows all the work that we've put in through our four years. We've enjoyed success. We've suffered from defeat. And to come after having the disappointing season that we did last year, it's such a great feeling just knowing that we got back to work, we put in a great season, and we're back with the opportunity to reach our goals."

Hogan enters the game ranked fifth nationally in passing efficiency at 170.1. He's thrown 24 touchdown passes and seven interceptions. He's completed 68.6 percent of his passes and been sacked 18 times. Hogan also has five rushing touchdowns and a touchdown reception. He's rushed for more yards by a Stanford QB in school history.

"We had very, very high hopes for Kevin because ultimately he is extremely competitive," Shaw said. "We knew he had a high ceiling, though we tried to nurse him along a little bit. To watch him start the season with such maturity and such toughness and be the kind of leader that you want, it's been great. It's been truly special because we've leaned on him a lot, both on and off the field."

Martinez ranks No. 11 nationally with 132 tackles. Anderson, who missed four games with an unspecified injury, ranks eighth on the team with 40 tackles, including a pair of sacks. Projected to 57.6 over 13 games would make him the No. 2 tackler behind Martinez.

Wright scored 13 rushing touchdowns, ranking him tied for 27th out of the 1,953 Division I players who scored a touchdown. Heisman Trophy runner-up and AP Player of the Year Christian McCaffrey is tied for 88th with eight rushing scores.

McCaffrey also caught four touchdown passes, returned a kickoff for a score and threw for a pair of touchdowns. The No. 2 rusher in the nation (1,847 yards) does a lot of things well.

Kicker Conrad Ukropina, who lives in Pasadena, has made 17 of 19 field goal tries and all 61 of his PATs. His team-leading 112 points is good for 14th nationally.

Beathard's favorite target is Matt VandeBerg, who has caught 61 passes for 639 yards and three touchdowns.

"The offense is amazing, but I think their key component is their offensive line," Martinez said. "Everything that they do, they work well together. It just seems like they work together like a well-oiled machine and I've never seen them make a mistake on film."

Josey Jewell has 119 tackles, leading a Hawkeyes defense that ranks 10th against the run (114.9) and is 15th in scoring defense.

"With a great team like Iowa, I think the key is just to rely on your technique and strength," Garnett said. "You'll see them finish until the whistle blows. Matching that intensity and making sure to stay on your blocks is going to be a key to success."

A LOOK AT THE 102ND ROSE BOWL GAME

* Stanford returns to the Rose Bowl Game for the third time in the past four seasons and 15th -- third-most all-time -- in program history. The last time the Cardinal accomplished that feat was a string of three consecutive appearances from 1934-36. Most recently, the Cardinal won the 2012 edition of the contest over Wisconsin, and fell to Michigan State in 2013.

* Stanford will take on Iowa in the Rose Bowl Game, the first-ever meeting between the programs and the fourth straight season the Cardinal will meet a Big Ten Conference opponent in a bowl game. Stanford is 23-29-5 all-time against Big Ten programs.

These local restaurants are donating meals to Bay Area residents in need. Here's how to help.
By Elena Kadvany | 6 comments | 11,084 views

Will the Coronavirus Save Lives?
By Sherry Listgarten | 29 comments | 3,861 views