Cardinal players chow down on tradition in Lawry's Beef Bowl 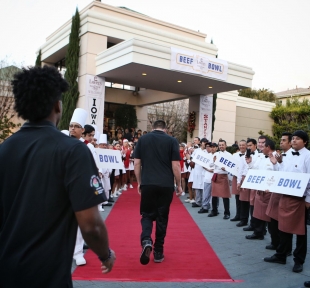 The Stanford football team participated in one of the Rose Bowl's oldest -- and perhaps tastiest -- traditions Monday evening when it took part in the 60th annual Lawry's Beef Bowl.

During the 2012 edition of the Beef Bowl, then-freshman Joshua Garnett established himself as one of the team's biggest eaters, consuming a team-high seven pieces of prime rib.

While Garnett did not match his previous best in this year's dinner -- the teams actually didn't compete against each other -- he and his teammates enjoyed entrees of prime rib, mashed potatoes and creamed corn. Highlights from previous Rose Bowls and Stanford's 2015 season played on televisions throughout the restaurant. The team finished the meal with a slice of apple pie and vanilla ice cream.

"It's definitely fun going to the Rose Bowl and experiencing the Beef Bowl as a senior compared to as a freshman," said Garnett. "As a senior, you really appreciate what the Tournament of Roses has done and the history behind the Lawry's Beef Bowl. It's fun to sit back and watch the young guys have a good time and it goes full-circle. I was able to really appreciate the event and it was definitely a great experience."

Remound Wright participated in the ceremonial spinning of the salad to open dinner and Brendon Austin provided the first carving of prime rib. Per tradition, Austin had to decide who to serve the first meal to. He chose the Rose Queen, the only person to ever do so in Beef Bowl history.

There were talks among the players as to who ate the most rounds of prime ribs but there was not a definitive answer. A.T. Hall was the rumored clubhouse leader at four.

Stanford head coach David Shaw concluded the evening by addressing the restaurant and was met with a healthy applause from his team. Shaw thanked Lawry's President and CEO, Richard R. Frank, the Lawry's staff and servers, and all the individuals involved in the evening's event.

Shaw welcomed Frank to the stage and presented him with a team-signed football and helmet.

Frank stepped to the microphone after Shaw's speech and provided high praise for the Cardinal's head coach.

"Something happened a minute ago that I don't believe has happened in the past 60 years of the Beef Bowl," said Frank. "A coach who got that big of an ovation from his own team when he was introduced."

Stanford returned to the team hotel following the meal and the starters took head shots with ESPN photographers for the Jan. 1 broadcast.

The media and fans got their first look at Stanford in pads in Southern California during a full practice in the early afternoon.

These local restaurants are donating meals to Bay Area residents in need. Here's how to help.
By Elena Kadvany | 6 comments | 11,106 views

Coronavirus: Plan ahead now for a big outbreak
By Diana Diamond | 19 comments | 4,125 views

Will the Coronavirus Save Lives?
By Sherry Listgarten | 29 comments | 3,892 views

The first few seconds after awakening; before I remember the virus
By Chandrama Anderson | 0 comments | 975 views