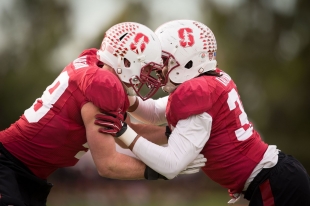 Linebackers Kevin Anderson (left) and Peter Kalambayi are Stanford's "Left Side, Strong Side" from the movie "Remember the Titans". Photo by Don Feria/isiphotos.com