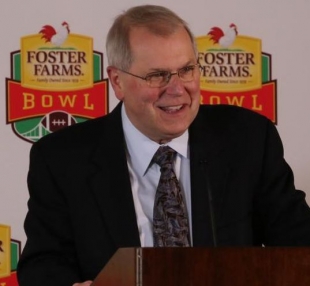 Former Stanford Sports Information Director Gary Cavalli, Executive Director of the Foster Farms Bowl and a veteran of more than 40 years in college and professional sports administration in the Bay Area, will call it a career this weekend. Photo courtesy Foster Farms Bowl.

For his last act, you would think Mr. Cavalli could have hired decent referrees for the bowl game. First, the Umpire ignores a blatant facemask right in front of him, then the replay referee ejects a player for a clean tackle. When the ESPN announcers are united in their disagreement, it has to be a wrong call. There should be some sort of repercussions for such a poor job. An apology, Mr. Cavalli?

Like this comment
Posted by Mark Weiss
a resident of Another Palo Alto neighborhood
on Dec 28, 2015 at 4:12 pm