Stanford's Thompson is Pac-12 Player of the Week in hoops 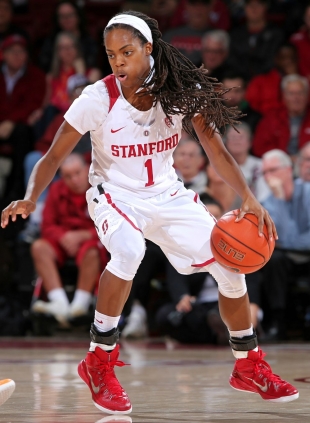 Stanford junior guard Lili Thompson is the Pac-12 Player of the Week in women's basketball. Photo by Bob Drebin/stanfordphoto.com

Stanford junior guard Lili Thompson was named Pac-12 Player of the Week for games played from December 14 to 20 the conference announced Monday.

The honor is the second of the season for Thompson, the third of her career and Stanford's 103rd all-time player of the week selection. The 2015 John R. Wooden Award and Naismith Trophy candidate also won three weeks ago after leading the Cardinal to a championship at the Gulf Coast Showcase in Florida. She won her first Pac-12 Player of the Week award on Nov. 24, 2014.

Thompson was Stanford's leading scorer in two wins last week over then-No. 14 Tennessee and Cornell. She led the Cardinal against the Lady Vols, scoring 19 points, tying a career high with seven rebounds and handing out four assists in 31 minutes. Stanford won, 69-55, beating Tennessee for the fifth-consecutive time in Maples Pavilion.

Thompson played just 19 minutes in a 93-38 blowout over Cornell on Saturday, scoring 11 points and again tallying four assists. She is fourth in the league in scoring (18.6 ppg) and 48 points shy of becoming Stanford's 36th 1,000-point scorer.

Stanford (8-2) is No. 2 in the NCAA RPI and has played the nation's third-toughest schedule. The Cardinal hosts CSU Bakersfield (2-10) Tuesday at 2 p.m. for its penultimate nonconference test.

Stanford's Kassidy Cook, who is sitting out this season in order to train for the 2016 Summer Olympics, won the women's 3-meter springboard title Sunday at the USA Diving Winter National Championships in Indianapolis, Ind.

Cook finished with a score of 975.20 to claim her second national title in the event, after winning at the USA Diving championships in August.

The top two finishers in each event qualify for February's FINA Diving World Cup in Rio de Janeiro, which is used to determine Olympic spots for each nation.

These local restaurants are donating meals to Bay Area residents in need. Here's how to help.
By Elena Kadvany | 6 comments | 11,102 views

Coronavirus: Plan ahead now for a big outbreak
By Diana Diamond | 19 comments | 4,120 views

Will the Coronavirus Save Lives?
By Sherry Listgarten | 29 comments | 3,886 views

The first few seconds after awakening; before I remember the virus
By Chandrama Anderson | 0 comments | 972 views