Solving problems, one student at a time 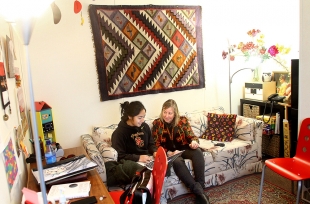 3 people like this
Posted by Stanford Collaboration
a resident of South of Midtown
on Dec 18, 2015 at 12:41 pm

The needs of our communities are extremely important for the vitality and quality of life of all residents. It's unfortunate that the work that matters in rarely funded knowing that the need is great. I'm hoping that funding sources will help support this crucial program in the bay area, since everyone would benefit.

As for assistance with Grant support, I would reach out to local universities, like Stanford. They could be another avenue, if only 10% of completed RFPs received support according to the article. I remember there was a yoga study introduced by psychologist and psychiatrists from Stanford. I would try to tap in to the researchers who conducted this study in EPA schools for support/assistance in order to fund this great work.

Thanks to Karin Schlanger for founding and sticking with Grupo Palo Alto. And thanks to the Weekly Holiday Fund for funding the organization and bring it to the attention of many of us.


Report Objectionable Content
Email Town Square Moderator
15 people like this
Posted by PAUSD?
a resident of Midtown
on Dec 18, 2015 at 1:53 pm

Report Objectionable Content
Email Town Square Moderator
2 people like this
Posted by commemt
a resident of JLS Middle School
on Dec 19, 2015 at 10:38 am

The trouble we experienced was that the major stresses for our child had to do with untrustworthy behavior by employees including counseling staff, so our child having trouble never felt safe to go to anyone associated with school. PAUSD would first need a major overhaul of district culture. I think making it possible for kids to seek outside help,too, would be good, and mechanisms to ensure a child's confidentiality is maintained if the child wants to maintain it from school.