As proposal to redevelop site around Equinox dies, another mixed-use proposal at nearby Palo Alto site advances 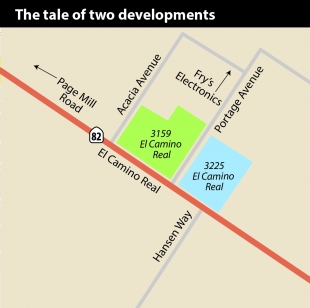 The development proposed around Equinox Gym, at 3159 El Camino Real, halts as a proposal for 3225 El Camino Real, the current site of the Foot Locker store, moves forward with a victory from the Planning and Transportation Commission on Dec. 9. Graphic by Kristin Brown.

What will it take .....REALLY PEOPLE For us all to come to the reality that with no solutions to the current traffic load on
eL Camino in sight.......MORE DEVELOPMENTS & DENSITY INCREASES MUST HALT!

For a supposedly highly educated community and planning department, I HAVE NEVER WITNESSED MORE IGNORANCE.
There are no livable core environmental principals that are sound in this communities urban planning department, zoning, traffic and parking plans. ALL is EXTREEMLY short sighted and decades behind other similar communities who are progressive environmentally, socially, and economically.

The planning department seems to be bought and swayed by the developers, not the citizens.

Hey! A recusal! Nice to see the PTC getting the message

Report Objectionable Content
Email Town Square Moderator
20 people like this
Posted by cm
a resident of Downtown North
on Dec 17, 2015 at 4:01 pm

I totally agree with Barb Weber. Cramming in more housing and office space, overloading our roads, schools, infrastructure and adding more use of water and production of CO2 to the world needs to stop. We passed a sustainable number of residents and workers long ago and need to stop building. Overpopulation is destroying the planet and every city with uncontrolled growth is part of the problem. It is OK to say NO to growth and development.

Report Objectionable Content
Email Town Square Moderator
23 people like this
Posted by Curmudgeon
a resident of Downtown North
on Dec 17, 2015 at 7:05 pm

"they hailed the project as a rare example of a "true mixed-use" project."

Our pro development cabal has giddily slathered that praise on every commercial development proposal they've ever seen, then carefully forgotten to check whether the "housing" component has magically morphed into premium office suites.

Report Objectionable Content
Email Town Square Moderator
16 people like this
Posted by Dont forget the boss
a resident of Community Center
on Dec 17, 2015 at 7:10 pm

Barb reminds us >The planning department seems to be bought and swayed by the developers, not the citizens.<
Don't leave out their boss, the city manager. It couldn't go on for years without his ok.
Architect Ken Hayes glass boxes are all over town.

Report Objectionable Content
Email Town Square Moderator
14 people like this
Posted by resident
a resident of Another Palo Alto neighborhood
on Dec 17, 2015 at 7:38 pm

Barb Weber has pulled the covers off the City Hall charade. All you have to do is drive around Palo
Alto, and what you see is destruction of a unique,
beautiful City on a scale and so complete, across
the board in virtually every aspect relating to
the urban and neighborhood environment it is truly shocking.

Report Objectionable Content
Email Town Square Moderator
2 people like this
Posted by mauricio
a resident of Embarcadero Oaks/Leland
on Dec 19, 2015 at 12:00 pm

development/density/urbanization is a fatal disease that has infected Palo Alto for the last few of decades and there doesn't seem to be any cure in sight. An elective continued exposure to this disease makes about as much sense as treating third degree burns by pouring boiling water on the victim.

We must halt all developments indefenitely. We must put a complete and indefinite stop to additional residents pouring into a town that already has much too much density. No more clever plots to attract even more traffic into this town.