Community feel in a 'nerdy' area of Mountain View 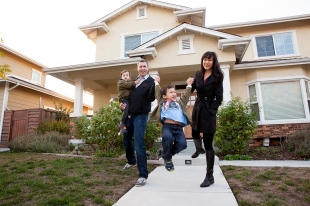 Steve Bell holds Spencer as he and and his wife, Vicki Chang, swing Sebastian in front of their home in the Wagon Wheel neighborhood on Nov. 23, 2015. Photo by Michelle Le.

On Friday nights, Steve Bell calls in to place an order at Mario's Italiano. Right away, he is asked if he wants the usual, and he replies, "Yes, that would be great."

For Bell (or "Friday Night Steve" as he is known at Mario's) and his family, that small-town feel is one of the many reasons they are glad they moved to the Wagon Wheel neighborhood in 2009. Bell and his wife, Vicki Chang, looked all over for a new home, but decided on this area for affordability and the appeal of its "nerdy" history, Chang said.

The neighborhood gets its name from Walker's Wagon Wheel, a local watering hole back in the day whose patrons were some of the engineers from Fairchild Semiconductor, Intel and National Semiconductor, Bell said. The stories live on, even though the building was demolished in 2003.

"It's really cool to drive along and see streets named after Fairchild and National," Bell said. "That's all a part of our neighborhood. I just love it."

Today, the neighborhood is still next door to tech companies, such as Google, but that's not all it offers. Now that the couple has two boys, Sebastian and Spencer, the family enjoys that they can easily walk to the smaller Devonshire Park, which is great for younger kids, or Whisman Park, which is much larger, Chang said. Nearby trails also welcome those up for more adventures.

"We love the area, but ... we feel the only thing lacking is a school," said Chang, who helped campaign for the reopening of Slater School, which closed in 2006. The Mountain View-Whisman School District board voted in 2015 to open an elementary school on the Slater campus. The school is scheduled to open in 2019.

Gary Rosen, a resident of Wagon Wheel for more than 20 years, said the lack of schools is definitely a problem. His own child actually attended Slater School many years ago, and knows that families with kids will appreciate the new school.

Since his time in the neighborhood, he has also watched it grow as companies have moved into the area. He understands that people want to live near their work because he chose Wagon Wheel for that very reason.

"It's definitely a lot more congested now," he said, "but there is a lot of diversity."

That diversity can be seen in its houses -- from apartments to single-family homes -- and its residents. To bring everyone together, the community uses its Yahoo group to talk about issues, such as Slater School, and plan activities, such as community breakfast or pumpkin decorating around Halloween.

"We had so many people come out to decorate that we kept running out of pumpkins," Rosen said. "It was fun to see."

These local restaurants are donating meals to Bay Area residents in need. Here's how to help.
By Elena Kadvany | 6 comments | 11,120 views

Will the Coronavirus Save Lives?
By Sherry Listgarten | 29 comments | 3,898 views

The first few seconds after awakening; before I remember the virus
By Chandrama Anderson | 0 comments | 979 views