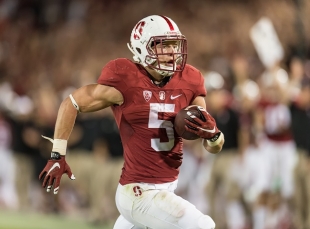 Maybe next year he can take it.

Congratulations to Christian for a great season and well-deserved accolades from writers around the country! I thought that he deserved the Heisman, but all three finalists seem to be good guys with tremendous athletic abilities. Christian is just 19-years-old and he has at least another year or two in which he could nominated again.

I feel good about Stanford's prospects next year. Even though Kevin Hogan is moving on, Keller Chryst is a tremendously talented QB who I think can and will surprise many people next season.

McCaffrey is in good company with former runner ups, who seem to have better careers than the majority of winners. Although he was most deserving, he had unlucky game times that fell after most of the voters had gone to bed (highlight reels just don't do someone like Stanford's #5 justice.) There couldn't be a better role model for collegiate athletes than McCaffrey, which would have been the best reason for him to win the Heisman. Other than that, he doesn't need an award by a commercialized group like the Heisman Trust. Is it just me or were any of the rest of you turned off by that lengthy, commercial presentation on Saturday night? Once again I saw three young, amazing, college players being used to make millions for a group that gave them little more than a stress filled night; with one winner getting a room at the Heisman frat house and a pretty trophy. Not to take anything away from McCaffrey being nominated as the finest player in the nation, but it seems like a sham of a process. Uninformed voters, an over-hyped award, benefitting an organization that makes millions on the night under the guise of a charity. I can't even find how much money the Heisman Trust donates each year, but I see they make over $25mil.

Report Objectionable Content
Email Town Square Moderator
Like this comment
Posted by Trophy or no Trophy
a resident of South of Midtown
on Dec 14, 2015 at 3:31 pm

My young son thinks McAffrey's the bomb! That's all that matters. He's his hero.

I share the sentiments of McCaffrey#1. To a person, I and my friends believed that it was a foregone conclusion that McCaffrey would not win the Heismann - not because he was not the most exciting football player to watch and to play the game this season, but for at least two to four other reasons - all of which were substantiated. McCaffrey should know that in the minds and hearts of many of us we believe him to be the best and wish him the best for continued success in all his endeavors. He made Stanford football fun and exciting to watch. Go Stanford in Pasadena!

We should resurrect the Pop Warner Award, given 1950 to 2004 to the outstanding senior year footballer on Pacific Coast by the Palo Club, in time to give it potentially to Wild-Caf in 2017.