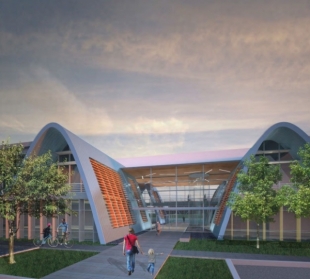 A rendering of new office buildings proposed for the former Facebook headquarters on Page Mill Road. Courtesy of City of Palo Alto.

Like this comment
Posted by Confused
a resident of Another Palo Alto neighborhood
on Dec 12, 2015 at 2:21 pm

If the complex was only 2/3rds office when it was the Facebook campus, what was Facebook doing with the other third? It's not a manufacturing company. Machine Zonr is also another consumer software company. Is it really going to use the same amount of space differently, or is this just a question about how uses change?

Retail space has far fewer employees and customers and generates less traffic than restaurants, but we don't build more parking spaces when retail converts to restaurants. The downtown parking problem shows the results. Maybe we need something a little more subtle to address parking than multiplying changeable usage categories by square footage.

I don't see how this project can be rebuilt using the outdated floor area maximum, when the REST OF TOWN has to comply with the latest rules.

If the parcel was subdivided, then each parcel must comply with the current zoning and building rules. They can't get away with using the seismic code from the original building, so why grandfather the Floor Area?

I hope City Council will vote against this giveaway to commercial developers and vote to support CURRENT ZONING RULES!

Don't you love how the EIR (environmental impact report) says that the added car traffic will not affect major intersections, when it is obvious that hundreds more commuters will affect traffic.

The logic that allows this conclusion is that the intersections are already at an "F" rating. Since it can't get any lower you can add as many cars as you want and not make it any "worse."

With logic like this no wonder the world is such a messed-up, crowded place. Obviously adding more people doesn't make the world more crowded anymore because there are already so many of us it doesn't matter.


Kudos to commissioner Asher Waldfogel for his independent thinking, and dissenting vote, here.