Becoming a part of the culture of music 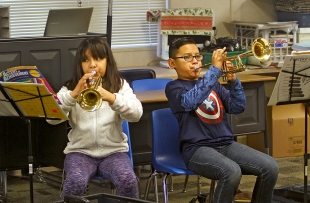 This is a nice story but many students have a difficult time getting their instruments to and from school. I asked the district several times for a loaner instrument that we could keep at home for my daughters practice and we were denied. My daughter takes the shuttle and it's crowded and she has left it on the shuttle by mistake. The hassle of bringing it home tends to lessen the amount of practicing. I think this service of loaner instruments should be available for all students in need regardless of income.

A great step in the right direction for our community! I hope we see more of these kinds of ideas and programs to support our students.

Great article, very well written and informative. That is really cool that there is a program like this, however I do agree that the instruments should be available for everyone, regardless of income.

Kids have to pay several hundred dollars for an instrument? What happened to free public education? You can't charge for summer school, how can you charge for a class during the school year?

Report Objectionable Content
Email Town Square Moderator
9 people like this
Posted by Hmmm m
a resident of Another Palo Alto neighborhood
on Dec 12, 2015 at 9:40 am

When we lived in Fremont, that school district had a program where, for 15-25 dollars a month, parents could "rent to own" an instrument for their child.

That should be manageable for almost anyone.

Report Objectionable Content
Email Town Square Moderator
3 people like this
Posted by Resident
a resident of Barron Park
on Dec 12, 2015 at 11:59 am

Great article! I have had all of my kids participate in this amazing music program. They have many instruments that they lend out free of charge for any student to use. I know that dealing with over a 1000 students, the district may run out and have trouble providing an instrument for every student. Perhaps we should try to raise money to increase their instrument funding so they can easily provide an instrument for all students?

'Are they ready for fully innovative Indian food?' Ettan arrives in Palo Alto with chaat, caviar and a secret menu
By Elena Kadvany | 0 comments | 3,569 views