With a kick and a snip, El Camino Park re-opens in Palo Alto 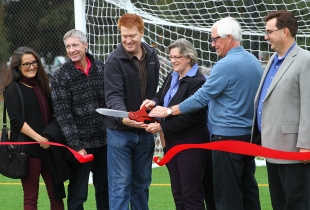 I'm interested to know why it took 4 years to complete this park. I drove past it every day on my way to Menlo Park and always wondered what was taking so long.

Maybe there are good reasons: I just like to hear them, if anyone knows.

what does steel head trout and a dog park have to do with anything. The park doesn't run along the creek it runs along the railroad tracks. Will somebody please explain how this impacts the trout that don't run in the dry creek anyways. So again we have nothing in downtown PA for the dogs to run. This is why we should have off leash early hours in parks before the kids and people come and same in the evening after dark.

Where are our dogs supposed to run and who cares about a bunch of people who like to run around kicking balls? There are plenty of places to kick balls no places for dogs to run

This is a nice field, and a welcome addition to the area. I refereed on it one evening last week and it was quite nice. A little pruning of the trees in the NE corner (near train crossing) would be nice in order not to cast a shadow in that corner. And the parking and bathroom facilities are quite good. It does have something nice that Mayfield could use - path lights which remain lit after the large overhead field lighting goes out.

Report Objectionable Content
Email Town Square Moderator
3 people like this
Posted by Does Castilleja pay to use city fields for practice? They should.
a resident of Greenmeadow
on Dec 9, 2015 at 11:42 am

I hope Castilleja pays user fees for the field space they use practicing.

Kudos to the City for getting this done. People should be prioritized over dogs. (Or has this town already gone to the dogs?) That said, I don't understand why there can't also be a dog park next to a creek.

how will field use be scheduled or prioritized?
a private school lacrosse team wanting to use the new soccer field - the local soccer teams are squeezed for field space and all waiting to use the field too

@Jonathan, I agree about people over dogs in parks but to say that they couldn't put a dog park in because of trout in the creek is ridiculous. I live by that creek there is no water in it at all, ever. In the spring when water might be there it is all dried up. For the city to just to sweep it under the rug and not to let the people know is not right. And again the dog park would of been by the tracks I thought

Another public facility for residents of the north side of town, while residents on the south just get more density and traffic. We pay taxes, too, with many of the areas that most need public facility have as great a per square foot cost as all but the most costly areas (and with greater density). Our youth have no place to go nearby after school on this side. The only major public asset, Bol Park (with no buildings) the neighborhood bought and paid for themselves.

You're welcome. Now remember there are City codes requiring things like open space when there is development, and it's not fair to put in in north for development in south. (South not being one area, either.)


Report Objectionable Content
Email Town Square Moderator
1 person likes this
Posted by Margaret
a resident of South of Midtown
on Dec 9, 2015 at 7:14 pm

Ay Carumba! Another city run projects drags it's sorry droopy *** across the finish line. Four years to dig up a playing field, install a cistern, and cover it up?! That's basically what has happened in that space in ultra s-l-o-w-m-o-t-i-o-n. There is a reason why "More than 20 people â€” mostly city officials â€”" were the only people attending this 'ceremony' of a shamefully slow city lead project, no one remembered that there was a park there any more!

You do realize that El Camino Park has been around for more than 80 years...it's not a new park by any means. And certainly you know that the park has been closed for the installation of an emergency water supply system - which benefits the entire city BTW.

I understand your POV - but at least pick your targets more wisely!

Please Apply So We Can Reject You!
By John Raftrey and Lori McCormick | 6 comments | 2,560 views