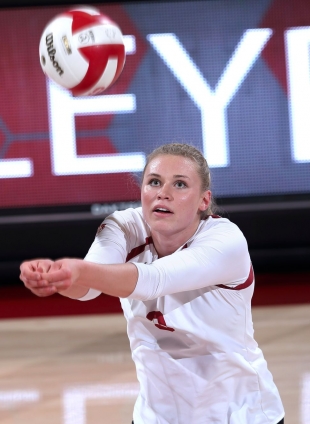 Stanford's Hayley Hodson has been tabbed the AVCA Pacific North Region Freshman of the Year. Photo by Hector Garcia-Molina/stanfordphoto.com

Joining Hodson on the 14-player team were seniors Madi Bugg and Brittany Howard and redshirt sophomore Merete Lutz. Stanford led all schools in the Pacfic North Region with four selections to the first team.

Stanford has had at least four all-region players for three consecutive seasons. Players named to the all-region teams are now in contention to become 2015 AVCA All-Americans.

Hodson, a native of Newport Beach, is the sixth Stanford player to earn AVCA Region Freshman of the Year honors, joining Logan Tom (1999), Ogonna Nnamani (2001), Kristin Richards (2003), Foluke Akinradewo (2005) and Alix Klineman (2007). She is the first Cardinal freshman to lead the team in kills (3.82 kps) since Klineman. She also leads the squad in points per set (4.52) and aces per set (0.34), ranking in the top-10 in the Pac-12 in both categories. A five-time Pac-12 Freshman of the Week honoree, Hodson led the team with 13 double-doubles this season.

Last week, Mead was named to the All-West Coast Conference first team team. She averaged 11.14 assists per set, which ranked No. 2 in the conference. She racked up 1,228 assists and tallied 40 aces with 11 double-doubles, 276 digs, 76 kills and 54 block assists.

In Division III, Menlo-Atherton grad Katie Doherty of Bowdoin, a junior libero, made the Northeast Regional first team. Joining her was Palo Alto grad Maddie Kuppe, a senior outside hitter from Tufts and Paly grad Becca Raffel, a sophomore outside hitter from Middlebury.

Palo Alto grad Shelby Knowles, a junior outside hitter from Wheaton College, was honorable mention on the Midwest Region team.

These local restaurants are donating meals to Bay Area residents in need. Here's how to help.
By Elena Kadvany | 6 comments | 11,081 views