Stanford's McCaffrey is among final three for Heisman Trophy 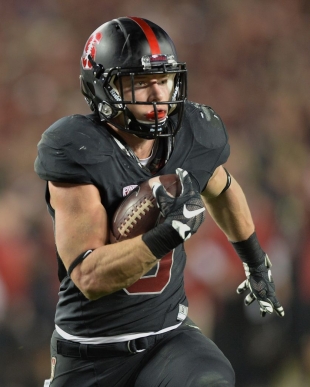 Stanford sophomore Christian McCaffrey is among three finalists for the Heisman Trophy award. Photo by stanfordphoto.com


Christian McCaffrey has gained more yards in a single season than any other football player in college football history. He deserves to win this.

@Nayeli, you chose the one whose parents both went to Stanford (and whose dad has 3 super bowl rings). Arguably I'd venture the other two finalists have come farther. On the other hand, pertinent to Palo Alto Syndrome, Christian has faced near impossibility measuring up to his parents' accomplishments.

Christian McCaffrey's genetic stock is high end...not only his parents but also his maternal grandfather (Dave Sime, famous Duke sprinter in the mid 1950's, world fastest human at the time, silver medalist in the 1960 Olympic 100 M dash). However, his work ethic and humbleness also comes from his family. He is a throwback type of player, yet he is truly great on the field, and he deserves the Heisman. Maybe the East Coast bias will work against him, though.

I have watched a lot of Stanford football, and he is the best I've seen.

Report Objectionable Content
Email Town Square Moderator
6 people like this
Posted by Jim
a resident of Midtown
on Dec 7, 2015 at 7:42 pm

I agree with Georgeâ€¦â€¦been watching Stanford football for more than 55 yearsâ€¦â€¦he's the best I've seen. Darrin Nelson and Glyn Milburn were greatâ€¦..the teams they played on, though, weren't always the best. Elway is still the most talented QB in program history.

Report Objectionable Content
Email Town Square Moderator
4 people like this
Posted by George
a resident of Midtown
on Dec 8, 2015 at 4:15 pm

McCaffrey, over the last year, learned to slow it down, slightly, as he reads his blocks, then he is up to top speed within two steps. Amazing to watch! Darren Nelson was quicker, but he didn't adjust to his blocks. Milburn was also quick (and probably faster than McCaffrey at top end). However, McCaffrey is simply the best all around back I have seen at Stanford. He deserves the Heisman.

I agree that Elway was the most talented QB at Stanford (including Luck, Plunkett, Albert and many others).

Report Objectionable Content
Email Town Square Moderator
2 people like this
Posted by Shallow Alto
a resident of another community
on Dec 8, 2015 at 6:16 pm

I guess everyone here on this discussion thread has forgotten that Derrick Henry and Deshaun Watson are also up for consideration for this year's Heisman Trophy.

But I guess that's to be expected from this group...

Report Objectionable Content
Email Town Square Moderator
6 people like this
Posted by Nayeli
a resident of Midtown
on Dec 8, 2015 at 10:13 pm


@ Shallow Alto: I don't think that anyone else is forgetting the other two Heisman finalists.

My husband is a big fan of college football (and he has slowly turned me into a fan). He thinks that Derrick Henry is a very good "power running back" but thinks that Christian McCaffrey's accomplishments this year is more impressive. He thinks that Deshaun Watson is a very talented QB but just not enough to merit the Heisman.

I don't really follow too many other teams and only know what I hear on television or read online. I suppose that I am a fan of Stanford since my sister is a recent graduate and we live here and attend the games.

I "root for the home team" and the players on that team. I suppose that it is why I cheer for San Francisco in baseball, the 49ers in football, the Earthquakes in futbol and America in the Olympics too.

Christian McCaffrey is an amazing player and he's broken a record that has stood for nearly three decades (which was set by one of the greatest football players of all time -- and another Heisman winner). I would like to see him win.