Next stop for No. 5 Stanford football is Pasadena | News | Palo Alto Online |

Next stop for No. 5 Stanford football is Pasadena 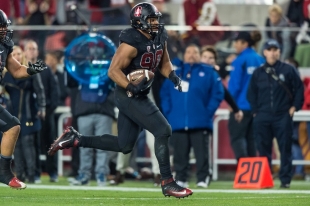 Solomon Thomas rambles for a touchdown after picking up a fumble. Photo by Jim Shorin/stanfordfordphoto.com

Congratulations to the entire team and coaching staff. They have worked hard all season to improve and be ready for the specific challenges each succeeding opponent brought to the games. And almost without exception a very tough week after week schedule. It has shown in the evolving play calling and subsequent execution as the season progresses.

The team has earned this trip to the Rose Bowl- one of the greatest of all bowls. Best wishes for the success this team deserves!

Like this comment
Posted by Julie armitano
a resident of Palo Alto High School
on Dec 7, 2015 at 1:42 pm

I am really proud of Stanford.
Good luck.
Congratulations to the team and Coach Shaw.