Stanford bowls over USC for the Pac-12 championship 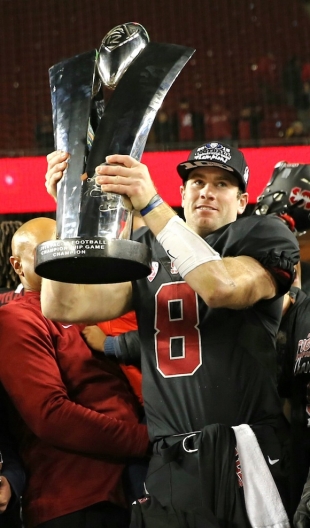 Stanford senior quarterback Kevin Hogan shows off the Pac-12 Conference Championship Game trophy, which the Cardinal won for the third time in four years on Saturday night. Photo by stanfordphoto.com


Amazing game! I hope that Christian McCaffrey gets a lot of attention in the selection for the Heisman Trophy! Kevin Hogan has been such a great quarterback for Stanford!

2 people like this
Posted by close to Final 4 playoff
a resident of Another Palo Alto neighborhood
on Dec 6, 2015 at 7:24 pm

Stanford did what it needed to do. But unfortunately the officials in an inexplicable outrageous blown call- an offside which never occurred on a successful onside kick- stopped the furious comeback of North Carolina in the final minute against Clemson, which if they had pulled the upset would have almost certainly put Stanford into the College Football Playoff for the National Title.

Cincy is a registered user.


Unfortunately, Marcus Mariota, a Pac 12 player. won the Heisman last year. There's no way McCaffrey gets it this year because of that. Someone less deserving in the SEC will probably win.

Without Kevin Hogan to balance the offense next year, I don't think he'll win it next year either.