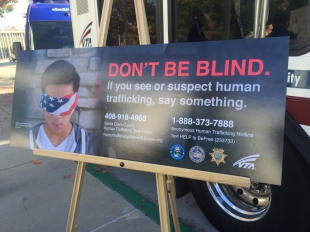 Santa Clara County officials launched a campaign Tuesday calling on the public to be on the lookout for human trafficking victims. The campaign will feature ads on Valley Transportation Agency buses, bus shelters and light-rail vehicles with images provided through the National Human Trafficking Resource Center. Photo by Jamey Padojino.

Like this comment
Posted by mark weiss
a resident of Another Palo Alto neighborhood
on Dec 3, 2015 at 1:46 pm

Posted by Name hidden
a resident of Fairmeadow

I have followed these types of campaigns for 30 years and they are a complete waste of money. It's not how you reach these victims. I should know how as I've been doing it for 30 years effectively.