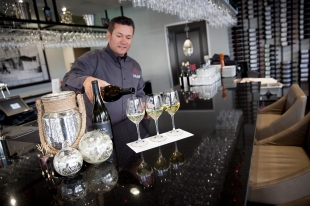 Was actually in there last night and they have already switched up the food menu, which is awesome! I love a place that is always on the move and trying new things. This article was very well written but last i checked Calave is a wine bar. This article sounds like a restaurant review.The fact that they even serve such yummy bites in there small space you can't even fit a TOASTER in it is amazing. Next time can we focus on the bar, staff, and feature WINES then food? Like I said its a wine bar not a food truck.

I was so happy when this place opened. I have been going there ever since they opened in July. I will disagree with you. I have seen some rotation with the wines since then and not have I seen that they also do featured wines of the month. I talked to the server a couple days ago and really loved the French Pinot (burgundy) they had as one of the 3 that was featured. She said it was really popular and that they were going to put on regular menu for awhile. Made me very happy. I disagree with our statement. I have seen this wine bar rotate and feel they are a true wine bar with the emphasis on wine. Being in Silicon Valley with many of my colleagues being from around the world they love that we now have a place to go with a great selection of wines and the atmosphere that does make you feel like you are in Lomdon or New York. This place is very cool and hip but also feels like it welcomes everyone. You don't have to be "cool " to go here. As far as the food I think what they offer for a wine bar exceeds my expectations. The quality is good. I don't have the expectations of a high end resturaunt when coming into a wine bar. But I will say the sandwiches are amazing and I always get the cheese and charcuterie and I love it. I have seen there kitchen from the street and it look like they have more space than you described as "just enough for a toaster and a refrigerator". Have you seen The Wine Room and Vino Locals kitchen? They did it right here. I'm so happy it they are here in my neighborhood and feel like I found my place to call my spot.