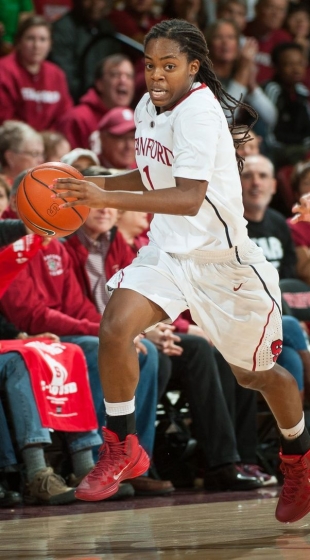 Stanford junior guard Lili Thompson is the Pac-12 Player of the Week in women's basketball. Photo by John Todd/isiphotos.com

Stanford's Lili Thompson was voted the Pac-12 Player of the Week in women's basketball after helping the Cardinal to a 4-1 record and tournament title last week.

In a busy week for the Cardinal, the junior guard led the way as Stanford won the Gulf Coast Showcase title where she was named the Most Valuable Player.

Thompson missed just one free throw all week, going 14 for 15 from the line for a 93.3 shooting percentage.

She netted 21 points in a 61-58 setback to Santa Clara to start the week and 26 in an 82-65 win over Missouri for her fourth-straight 20-point effort, making her the first Stanford guard since four-time All-American Candice Wiggins to achieve the feat.

Thompson also had 19 points and seven assists in a 74-66 win over Dayton, after recording back-to-back six-assist outings in the opening games of the Showcase. She closed out the tournament with 17 points, nine of which were from a perfect outing from the charity stripe, to lift the Cardinal to a 71-65 victory over Purdue.

This is Thompson's second-career player of the week honor and Stanford's 102nd all-time.

Ukropina went 5-for-5 on extra-point attempts in No. 7 Stanford's come-from-behind 38-36 win over No. 4 Notre Dame. After quarterback Kevin Hogan connected a 27-yard pass to Devon Cajuste, Ukropina hit his only field goal attempt of the game, a game-winning 45-yard field goal as time expired.

Stanford outside hitter Brittany Howard and opposite Hayley Hodson have been selected the Pac-12 Offensive Player and Freshman of the Week, Commissioner Larry Scott announced Monday.

Howard helped lead the senior class to a perfect 8-0 record against Cal and a 7-0 mark against UCLA in their four years on The Farm. Against the Golden Bears, she notched her 10th double-double of the year with 12 kills and 13 digs. Versus the Bruins, the Los Altos native recorded a career-high 22 kills with just one attack error to hit .404.

Hodson finished with a team-high 18 kills on .351 hitting to go with six digs and five blocks in the four-set win over the Golden Bears. The Newport Beach native followed up with 21 kills, 13 digs and four blocks in a come-from-behind five-set win at then-No. 13 UCLA. She is tied for the team-lead with 12 double-doubles on the year and has tallied 20-plus kills in a match on four occasions.