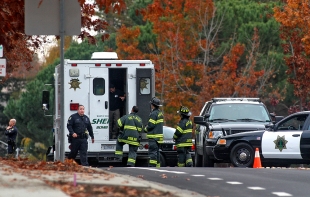 Douglas Moran is a registered user.


This was the location of a US Army camp during WW2. A neighbor who lived nearby at that time said that as a boy he and friends would wander through the camp. He doesn't remember anything near that site that would have been a practice range for live grenades. From his experience later in the Army, he speculates that what was found might be a practice grenade -- no explosives, but used to practice throwing accurately. Not to say that some idiot didn't bring a real grenade back into camp.

Seems that they do come across live grenades that people have uncovered.
Back in August there was a live one found out of 8 from WWII. Crazy to think that they weren't more careful back then.
Web Link

The one found yesterday was from WWI which are typically unarmed.

Clarification: This is the first grenade I know of to be unearthed on the former Camp Fremont. The other unexploded munitions I know of were 75-millimeter shells found around the Palo Alto Hills Golf and Country Club and Foothills Park in 2008 and 2010, within Camp Fremont's former artillery range, and verified as being WWI-era by demolitions experts. Government documents mention grenade practice southwest of the then town of Mayfield, but remember this was a large area of very undifferentiated open land in 1918. My book, out in January, tells more.