Stewards of Bol Park path give it new life 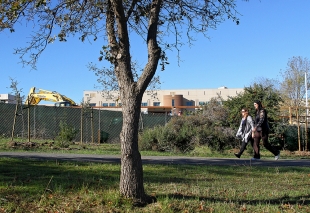 Pedestrians walk on a path adjacent to construction at the VA Palo Alto Health Care System near Bol Park, where young trees have been planted on the perimeter. Photo by Veronica Weber.

A lot of students use this path to walk or bike to Gunn High School or Terman Middle School. If the path wasn't there, car traffic on El Camino and Arastradero would be much worse in the morning.

My biggest request is to find a way to extend the trail north/eastwards across El Camino and over the Caltrain tracks into Midtown. That way, kids won't have to bike on Page Mill Road or California Ave or through that narrow congested tunnel at the California Ave Caltrain station. More than one kid has crashed their bicycle in that tunnel because of the congestion and the crazy crash bars that make it even more congested.

Yes, the city is trying to push kids into biking on Charleston and Arastradero, but that can't be the best the city can do, especially for younger kids.

If people, including students, would actually WALK their bikes through the California Avenue tunnel, there would be a lot fewer problems.

Report Objectionable Content
Email Town Square Moderator
12 people like this
Posted by resident
a resident of Barron Park
on Nov 30, 2015 at 1:20 am

I am very grateful that Barron Park has such dedicated residents who continue to contribute so much. I hope this article gets posted at Bol Park Kiosk.

Great thanks to those listed - thanks for all your work with the VA hospital construction issues and now with the bike path!

Report Objectionable Content
Email Town Square Moderator
5 people like this
Posted by Carol Gilbert
a resident of University South
on Nov 30, 2015 at 1:31 pm

Good article, but I must correct one mistake. It was not the Chairman of the SP Railroad that I took on a tour of the new Bol Park, but his chief assistant, who used to ride the now discontinued line to his office in San Francisco. The tour stirred old memories and indeed did bring tears to his eyes. Thanks to Sue for otherwise accurate reporting.