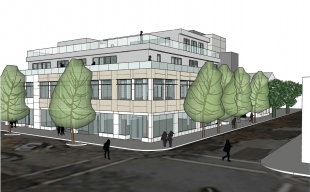 The Palo Alto City Council will consider on Nov. 30 this revised design for 429 University Ave., a four-story building that would replace two existing one-story buildings. Rendering courtesy of Elizabeth Wong

the shadow analysis Ms. Wong referred to was done by the Replacement architect she hired to replace Hayes Group.
Shouldn't staff have hired an impartial individual to conduct such an analysis?
It seems flawed to find that trees, that are shorter than the building and certainly not as solid as a building ( are they deciduous trees? ) would cast the same shadow as the building itself.

The building is certainly not compatible with the "conforming " buildings in the area. The larger buildings nearby are Non-conforming; meaning they were built before the present code standards, but remain until rebuilt and brought into conformance.

"Gooyer said during the ARB's review. "I mean, the reality of it is University Avenue is changing. Let's face it. A lot of the one- and two-story buildings that are there now are not going to be there."
Commissioner Gooyer not only seems to have crystal ball, but seems to be arguing for a hodgepodge development on University ave that both disrespects the downtown design guidelines and would even FURTHER contribute to the parking disaster in the downtown north and south neighborhoods that is rapidly creeping into crescent park and beyond.

It is concerning that the ARB had so little faith in the changes made by the new architect; in fact they said they could not recommend approval of the current version of the building, implying the integrity of Hayes Group design had been compromised.
In fact the massing and scale have not been reduced. the building is not one single foot smaller and the "massing has been shifted towards the Alley and Kipling street where it is most unwanted.

It is a shame that the applicant did not present a new version that responded to the city council direction!

She's following ALL of the design and parking requirements. A 50' tall building, which is allowed, will cast a shadow. Surprised? If the rules need to be changed, there is a process by which to do this. In the meantime applicants and the city council need to respect the existing rules. Grow a spine, council, and approve something that is what the zoning calls for, even if you personally don't like it.

Report Objectionable Content
Email Town Square Moderator
26 people like this
Posted by resident 1
a resident of Adobe-Meadow
on Nov 25, 2015 at 1:16 pm

Whenever I drive by the new building at Alma and Lytton I look in to see if there is anyone in there. It looks like the place is empty. It is an unappealing building. So it looks like there are opinions in abundance as to what the downtown is suppose to look like.

All glass buildings have limited appeal for a business. It looks like you could blow the place down. There needs to be substance to the building - it is suppose to last about twenty years - give or take.

I think the plans for the Menlo City upgrades are really good buildings with a lot of character and substance. I have given up on the PA city design review board - they keep imposing their strange design opinions on everything.

I don't think a 20 year life span for a building constitutes "substance." Does that mean you advocate cheap, disposable construction materials? Are you a contractor or supplier of building materials?

Report Objectionable Content
Email Town Square Moderator
9 people like this
Posted by resident 1
a resident of Adobe-Meadow
on Nov 25, 2015 at 3:18 pm

If High Speed Rail is implemented on the Caltrain tracks then the buildings in proximity of the train station -which the one above is - will probably be replaced due to widening of the road in that section. They will want to go to a 4 track system vs two track. Alma is a very narrow road in that section. Outside requirements will change the footprint of the downtown area.

Report Objectionable Content
Email Town Square Moderator
39 people like this
Posted by Sheeeesh
a resident of Evergreen Park
on Nov 25, 2015 at 5:25 pm

If this development is so ugly and so divisive, then don't build it, plain and simple. It will benefit no one but Ms Wong, the architect, and the contractor. That is NOT enough in its favor.

University Ave isn't the Champs Elysees. Eichlers aren't Notre Dame. Why are people here so hellbent on saving "artifacts" barely older than their grandparents?
If politicians and bureaucrats really want to preserve their precious slice of suburbia, they should start by de-incentivizing businesses. You can't have it both ways.


University is eventually going to feel like a big tunnel with no roof....

Report Objectionable Content
Email Town Square Moderator
18 people like this
Posted by cm
a resident of Downtown North
on Nov 25, 2015 at 7:25 pm

1. Buildings are not allowed to be 50 feet tall. They have to meet zoning. 50 feet is the upper limit but not all buildings are legally allowed to be this tall despite what past city councils have done.
2. Past growth-promoting city councils have changed the zoning to allow larger buildings, this council is trying to restore the zoning that our city used to have before the pro-growth era.
3. Make this building 2 stories and it will be fine.
4. Claiming that all of University will one day be an office canyon as justification for allowing this building is what is known as a self-fulfilling prophecy. How about this building needs to stay at 1-2 stories so we don't destroy the downtown. This works for people who what to have a reasonable quality of life.
5. Let the sunlight shine and the trees grow in the downtown. No more zoning exemptions. Return to the original zoning for downtown.

Report Objectionable Content
Email Town Square Moderator
11 people like this
Posted by southbayresident
a resident of another community
on Nov 25, 2015 at 8:40 pm

Boring and uninspiring? - Yes
1980's throwback design? - Yes
Manhattanization of Palo Alto? - You got to be kidding!!!

Report Objectionable Content
Email Town Square Moderator
14 people like this
Posted by resident 1
a resident of Adobe-Meadow
on Nov 25, 2015 at 9:10 pm

Well southbayresident - that we can agree on. It looks like they went to the cheapest building materials and cheap design. All of the newer building are going down the wrong road.
So Apple made a building that is glass and now everyone wants to create something that is along those lines. But Apple can move out of the building anytime they want - the purpose of their building is solely to sell their products. That is it.
Who or what is going to lease space in the building? A lot of businesses do not want to function in a fish bowl with a bunch of people walking by looking in.

Report Objectionable Content
Email Town Square Moderator
13 people like this
Posted by Curmudgeon
a resident of Downtown North
on Nov 25, 2015 at 10:23 pm

"4. Claiming that all of University will one day be an office canyon as justification for allowing this building is what is known as a self-fulfilling prophecy."

The Palo Alto overdevelopment process operates by using existing abominations to justify the next atrocity. A somnambulant city council dutifully complies, and that's how we got the mess we have.

Let's hope our new council breaks with its predecessors, acts intelligently, and cuts this unsightly pile of urban blight down to size. Else, like a zombie, this project will become yet another existing abomination to be cited in justification of the next atrocity.

Report Objectionable Content
Email Town Square Moderator
16 people like this
Posted by Dennis Briskin
a resident of Midtown
on Nov 25, 2015 at 10:33 pm

That corner is no place for such a massive structure.

13 people like this
Posted by downzoning
a resident of Another Palo Alto neighborhood
on Nov 26, 2015 at 1:22 pm

This building is a debacle on that corner by every measure - design,scale,
compatibility, access on Kipling. The first step in creating some semblance
of responsible government control over development at this point in PA is a down-zoning in the commercial areas. Likewise in the residential areas
FAR's need to be reduced and setbacks increased.