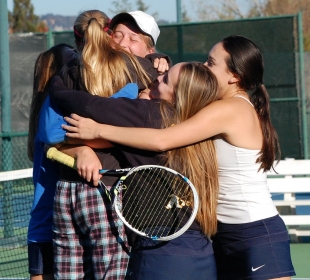 Menlo senior Schuyler Tilney-Volk (white hat) is congratulated after teaming with Kathryn Wilson to clinch a 4-3 semifinal win over Dougherty Valley in the NorCal regional. Photo by Lena Wu.