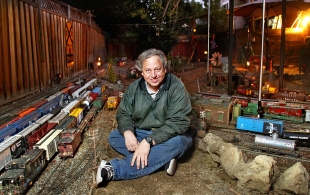 Eric Struck sits in his backyard surrounded by his model train collection which he operates for the public on weekends. Photo by Veronica Weber.

Actually, G scale is 1 to 22.5, or about twice the size of Lionel O scale that people are familiar with.

We've been wanting to go for years but still haven't made it. Can't wait to check them out! Thank you, Eric, for doing this, and thank you PAO for this story!

I remember the Mayfield Cutoff, but never got to ride the route.