Stanford to play for the Pac-12 football championship 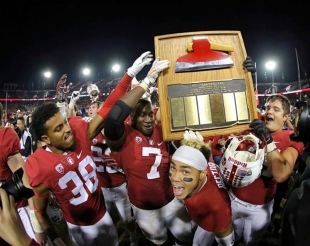 Stanford keeps the Ax for a sixth straight year. Photo by isiphotos.com

Coach Shaw's statement that they don't have a player in the program that lost the Axe is not true. Brendan Scarlett has lost at least three. He played for Cal before enrolling at Stanford as a graduate student with NCAA eligibility!

I have been waiting for that reverse play - everyone follows McCaffrey except one guy shadowing the QB so the entire other side of the field is always clear for the taking.


I really hope that this game puts Christian at the forefront of the Heisman conversation. He is an outstanding player and, from what I understand, a first-rate student and man.