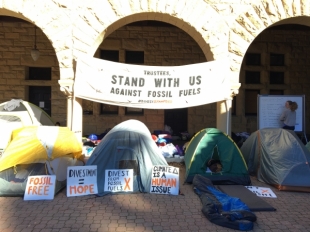 Tents and protest signs outside of Stanford University President John Hennessy's office on Thursday, urging him and the Board of Trustees to divest from fossil fuels. Photo by Elena Kadvany.


This just proves that there is no accounting for opinion -- no matter how one-sided or two-dimensional it might be.

A whole week of classes missed for nothing, only to be shut down and sent away by the president.

Fine example they set for the local high school kids.

They all need to go and prepare to fly/drive away to their fossil-fueled holidays.

Report Objectionable Content
Email Town Square Moderator
14 people like this
Posted by resident 1
a resident of Adobe-Meadow
on Nov 20, 2015 at 7:29 pm

Thank you to the SU Administration / Management for taking charge of this situation which was allowed to spiral out of control. SU has enough issues generating "interesting" articles in the papers at this time so we do not need additional articles which point to civil disobedience / unprofessional behavior of both the students, administration, professors - and now the ALUMNI.

Coal is a reasonable divestment - I get very angry about the Duke Energy people on the east coast who showed up on a TV investigative show. I get very angry about the scheme to barge coal down the Columbia River to Portland to ship to China. That got squashed. Shame on the Department of Interior who was in part a participant in this scheme - I guess we owe money to China.

And the coal trains that are going to come to the bay area make me wonder where is the Silicon Valley Leadership Group that should be trying to stop this? Where are the key developers who have buildings next to those tracks? You know who I am talking about here. Key SU people with their names on buildings.

SU has dealt with the coal divestment so they are good to go. But the continuing activity specific to coal needs to taken on by the big boys who have money in the game - not SU students.

Hey guys - do not use students to fight your battles. Step up to the game. Alumni - if you have money in this game then you need to put your face on it - not push it onto the students and penalize SU.

However - oil / gas is a different topic. Every one with a high end stove in their home is using gas - that is just at the "home level" along with the heating. But oil and gas drive the turbines that produce electricity across this country and other countries. Wars are going to be fought over who can heat and feed people - and oil and gas are critical to this. Even South Africa knows this if you are a "divestment" person - they are going to build up their capability for oil / gas to increase development in the country..

I have been to a former soviet country and know how hard it is for the people there and how they are still in the "sphere" of control by Russia purely on the availability of gas and oil. That is a key political driver by Russia.

The tactics described in the article about retaliation by the students and alumni are disgraceful. The fact that the students got accepted by SU is a gift to them that they worked very hard to get. And their parents who supported them to get to this point. The Alumni should know this is a gift.

Don't devalue that gift [portion removed.] Contribute and pass the gift on to future students who want your support and acknowledgement of a job worked hard for and a vote for future success.

Report Objectionable Content
Email Town Square Moderator
10 people like this
Posted by AllYouCanEat
a resident of Mountain View
on Nov 21, 2015 at 6:47 am

Yawn... Two weeks from now all of this will be forgotten.

Report Objectionable Content
Email Town Square Moderator
7 people like this
Posted by resident 1
a resident of Adobe-Meadow
on Nov 21, 2015 at 12:02 pm

SU has the most advanced program concerning green house gases and the most advanced sustainable power plant available - more than most cities or any other university. So the students have available the best that is out there from which to conduct their studies. Good going SU!

They left because they are on their way Sunday to Paris for the UN Climate summit. So we can assume that the sit-in was planned and timed relevant to the Paris summit.

Now they can report and be martyrs to the great overall challenge of divestment. Maybe they can check in with the folks from South Africa who are going to increase their utilization of gas as the third top priority to help in the development of their country. Their electrical system is not up to speed.

Can't wait to see how this gets followed in the future.

Report Objectionable Content
Email Town Square Moderator
2 people like this
Posted by resident 1
a resident of Adobe-Meadow
on Nov 23, 2015 at 9:45 am

In the SFC and SJM 11/23/15 - "Major power failure in Crimea." The major power lines in to Crimea were blown up by "saboteurs" leaving over two million people without power. Crimea, annexed by Russia in 2014, depends on Ukraine for electrical power. Gas generators are being used to provide back-up electrical power while the electrical grid is repaired.

Climate change is happening but political control of the power grid is also happening and not always to other government's schedules or concerns.