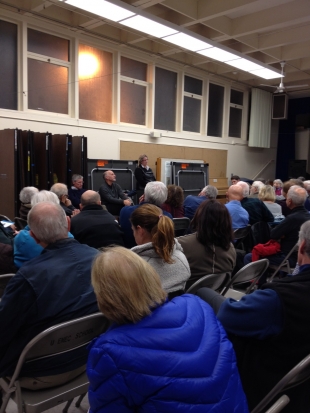 Palo Alto officials held a town hall meeting last week at Duveneck Elementary School to listen to residents' concerns and provide a better understanding regarding how the city aims to solve issues plaguing their neighborhoods. Photo by Sue Dremann.


Where was it posted that there was a meeting at Duveneck? I need to get on the distro.

I was not made aware of the meeting either.

The Town Hall meeting was announced in multiple places, including on the Crescent Park Neighborhood Association member's email list.

This meeting was not widely publicized. I would have attended if I had known about the meeting. I read PaloAltoOnline daily, and say no mention of it. We can't assume that everyone subscribes to the Neighborhood Association Mailing List.


To City Council/City Manager - I believe you already know that many of us choose not to be part of the homeowner's assn. I personally have mentioned this to your staff myself. I shouldn't be excluded because I choose not to be part of an organization that, in my opinion, only represents the opinions of the leader rather than the opinions of the entire neighborhood. Great example of doing the right things wrong....please cast a wider net next time. A notice to all the neighborhood addresses is more appropriate.

Report Objectionable Content
Email Town Square Moderator
4 people like this
Posted by I noticed
a resident of Duveneck/St. Francis
on Nov 17, 2015 at 4:21 pm

There was a good amount of discussion about parking spilling over from business areas into residential neighborhoods. A comment was made that the City seemed to be seriously under parked. None of the City's representatives were willing to own up to the fact that this is a self-inflicted problem caused by approving projects with inadequate parking. The culture in the Planning Department has to change to stop giving developers exemptions from creating adequate parking.

Report Objectionable Content
Email Town Square Moderator
6 people like this
Posted by New in town
a resident of Midtown
on Nov 17, 2015 at 5:49 pm

The gentleman who wrote:

Jim Keene's answer was a short and dismissive, 'Well, we have to maintain the city's roads.' That is not what I think of as a dialog."

...hit the nail on the head. Keene is obstructionist to the needs of residents.

I am convinced the city really doesn't want resident input on controversial issues. The city claims to advertise meetings with neighbors, but they mail out nondescript postcards that look like junk mail. They are easy to miss. The city also sends out postcards that often arrive after the meeting has been held.
Also, beware of the new Chief Transportation Officer, Joshuah Mello. His former job was with Alta Planning, the company that wanted to lay hideous, excessive green markings "sharrows" all over our residential streets. He also proposed excessive signage on our residential streets. He needs to be monitored.

Report Objectionable Content
Email Town Square Moderator
2 people like this
Posted by Midtowner
a resident of Midtown
on Nov 17, 2015 at 10:24 pm

Uh, Palo Alto Resident, maybe the city can send you a special mailing printed on that fluorescent paper so they won't be so "nondescript" and prevent you from doing your civic duty.

Report Objectionable Content
Email Town Square Moderator
3 people like this
Posted by irrelevant
a resident of Another Palo Alto neighborhood
on Nov 18, 2015 at 6:52 am

This meeting was irrelevant in terms of addressing the issues facing our
residential areas except as a statement itself as to where we are in
Palo Alto. The meeting was detached,disconnected from the reality
of what is taking place here.

Report Objectionable Content
Email Town Square Moderator
1 person likes this
Posted by Johnny
a resident of Midtown
on Nov 18, 2015 at 9:45 am

It's not the city council's job to mold society through legislation. Their frivolous positions must be cut but they won't because they get paid off our tax dollars without doing any real work.

If I was at the meeting I would ask the rulers of Palo Alto to do NOTHING. The less they do, the better.

Would you kindly, stop wasting money, don't tell us how to live, and get out of our way.

Report Objectionable Content
Email Town Square Moderator
1 person likes this
Posted by Duveneck Resident
a resident of Duveneck/St. Francis
on Nov 18, 2015 at 11:38 am

Thank you for holding this town meeting. Like all neighborhoods Duveneck/St. Francis has its hot button issues such as the Edgewood Grocer, Flooding and Airport noise. Based on other comments I'd say a flyer and advertising would be warranted next time and you'll get an even bigger turnout. I'd like to give a special shout out to those who have been pushing flood protection forward. Specifically, Pat Burke, Len Materman, Joe Teresi and Michael Keene. Please keep pushing to get the Chaucer and Newell bridges fixed.

Also thanks to the planning department for actually imposing the fine for lack of a grocer. In order to develop Edgewood Plaza, Sand Hill Developers made a commitment to provide a Grocer but the lease contract they wrote with Fresh Market did not ensure Fresh Market would promptly sublease it to another grocer if they vacated it. Thus penalties against Sand Hill Properties are fully warranted and hopefully future developers will take their development obligations to the city more seriously. Sand Hill Properties also demolished a building they were supposed to preserve during the re-development of Edgewood Plaza.

Report Objectionable Content
Email Town Square Moderator
2 people like this
Posted by irrelevant
a resident of Another Palo Alto neighborhood
on Nov 18, 2015 at 9:47 pm

@Resident of Palo Alto
Thanks for the info and insights. Nobody could summarize the State of
the City better than you just did in those two short paragraphs.

The Crescent Park Neighborhood Association charges $20/year to join. Do other neighborhood association also charge a fee? Most everyone can probably pay it, but seems like such associations should be free to join, especially if the city uses such associations as a key means to reach the community. The associations are run mostly by volunteers and use e-mails or free groups anyway, so I don't see why they can't be free.