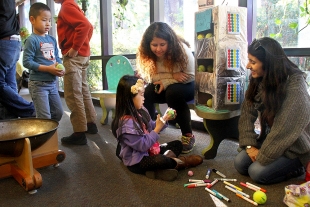 Stanford students Kelley Gomez, right, and Adriana Ganem assist Alyssa Gian, 8, center, as she decorates her tennis ball with markers as the students test out their "Adopt A Ball" prototype exhibit at the Palo Alto Junior Museum & Zoo on Nov. 11. The exhibit allows children to decorate tennis balls which are used in the museum's kid-powered ball machine. Photo by Veronica Weber.