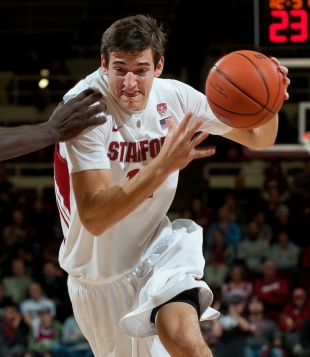 Stanford senior Rosco Allen will have to take on a major role for the Cardinal, which has four key players sidelined by injury heading into the season opener Friday against visiting Wisconsin-Green Bay. Photo by Don Feria/isiphotos.com

You confuse the Allen twins' roles. Marcus who blossomed last season is a shooting guard. Malcolm, who was a medical redshirt last season, is a point guard. If Malcolm hadn't missed last season, he would've started at PG ahead of Robert Cartwright. During the postseason NIT tournament, Christian Sanders took over at PG for many of the bigger games. If Malcolm Allen is healthy, his team-best speed and quickness should get him back in the lineup as soon as he shows that the rust has worn off; he'd shown well as a freshman during that Sweet Sixteen push.